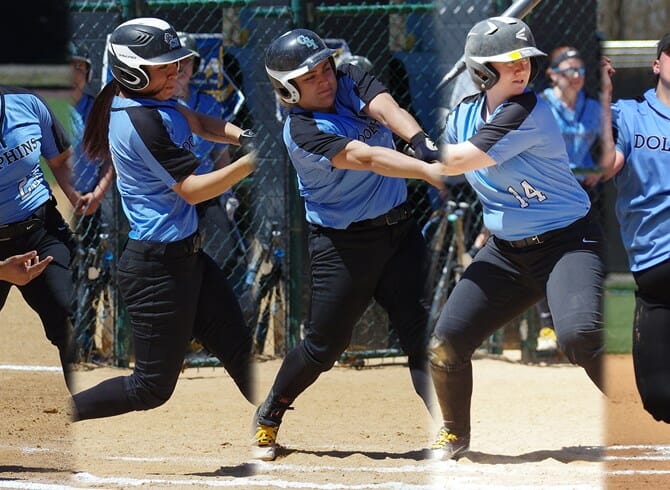 On the heels of their regular season championship and on the eve of their title defense, the College of Staten Island softball team got more good news their way as the CUNYAC announced their All-Stars in the sport.  Head Coach Stella Porto took home her seventh CUNYAC Coach of the Year honor, while Nicolette Trapani took home Pitcher of the Year honors for the second time in her illustrious career.  Five other Dolphins were spotlighted, including sophomores Patricia Riches and Jamie Holmes, junior Alison Meagher, and senior Vanessa Jioia, who were all named All-Stars, and junior Antoinette Galbo who was named the Sportsmanship Player of the Year.

Trapani is wrapping up a tremendous career with a terrific senior season in the circle for CSI.  Against the backdrop of a rigorous out-of-conference schedule, Trapani boasts a 9-6 record with a 2.34 ERA, fanning 91 batters in 92.2 innings pitched.  She has registered 13 complete games, opponents are batting just .244 against her, and she has walked just 17 batters this season, just over one per game.  An All-Star each season, Trapani won the conference’s Pitcher of the Year honor in 2016 as well.  She has tallied 47 wins in her career with a career ERA of 2.30.  She is a Top 5 pitcher for the Dolphins all time in those two categories, as well as innings pitched and strikeouts.

Joining Trapani as a first team All-Star is last year’s Rookie of the Year, Patricia Riches.  The shortstop is batting a whopping .458 this season, leading the team in hits (44), runs scored (36), doubles (16), and is tied for the team lead in walks with nine, boasting her on-base percentage to .514.  Her 16 doubles are two short of the CSI single-season record, and good for third all-time, a tremendous accomplishment considering CSI has only played 30 games to this point, mostly to do with weather-related cancellations.  On top of her quality at the dish, Riches has played an outstanding shortstop, boasting a fielding percentage of .974, leading the team with 80 assists.

Fellow sophomore Jamie Holmes has had a breakout year in 2018, earning CUNYAC Player of the Week on two occasions.  She is batting .390 this season, posting 16 extra base-hits including 14 doubles, tied for fourth all-time in a CSI single-season.  Holmes also leads the team with 25 RBI, is slugging .634 and boasts a .973 glove at first base and behind the plate.  She has played in all but two games this season after making 22 starts as a freshman last year.

Junior Alison Meagher joins Trapani as an All-Star in the pitcher’s circle this season.  A first-year sophomore last season, her second-season with the Dolphins has yielded terrific results, as she has posted a team-best 10-4 record with an ERA of 2.59, good for second on the team.  In her 81 innings pitched she has registered 48 strikeouts, allowing only 75 hits.  Opponents are batting .236 against her.  For extra measure, Meagher is batting .246 at the plate with five extra-base hits, including a team-best three home runs.

Rounding out the All-Stars is Vanessa Jioia, who gains her third such citation in three years with the team.  Jioia is batting .380 this season, collecting 22 RBI, good for second on the squad.  She is tied for the team lead with nine walks, and her 21 runs scored are tied for third on the team.  The slugger is equally a force behind the plate, where she has a lone error in 116 chances, good for a team-best .991 fielding percentage, tied for sixth all-time in a single-season at CSI.

Each year the CUNYAC honors a Sportsmanship Team, acknowledging a player from each campus who exemplifies the word.  CSI junior Antoinette Galbo was the player honored, and she backed it up by winning the conference’s overall Sportsmanship Player of the Year honor.  Galbo has helped galvanize a relatively young team that boasts just two seniors this season, steadying the course of the team and continuing the pace of the national-caliber program.  On top of her off-the-field achievements, she has been just as potent on the diamond, batting .404, placing second on the team in hits with 38, adding a team best five triples and five stolen bases.

Of course, the most accomplished Dolphin of them all is Head Coach Dr. Stella Porto, who in her 16th season as CSI Head Coach has now collected her seventh Coach of the Year honor, given to her by her CUNYAC peers.  The Dolphins finalized yet another CUNYAC Regular Season title after a 12-0 regular season, and posted its sixth-straight 20-plus win season.  CSI has won a CUNYAC-record five-straight Postseason Championships as well, and earned the No. 1 seed in the postseason tournament as they get set to embark on their drive for six.

CUNYAC Player of the Year honors went to Lehman College’s Maranda Diaz, while Hunter College’s Gianna Raimondi was named Rookie of the Year.  For a complete list of honorees, click HERE.

CSI will next be in action on Friday morning, introducing postseason play by hosting No. 4 Baruch College in the opening game of the Tournament at the CSI Softball Complex at 11:00 am.