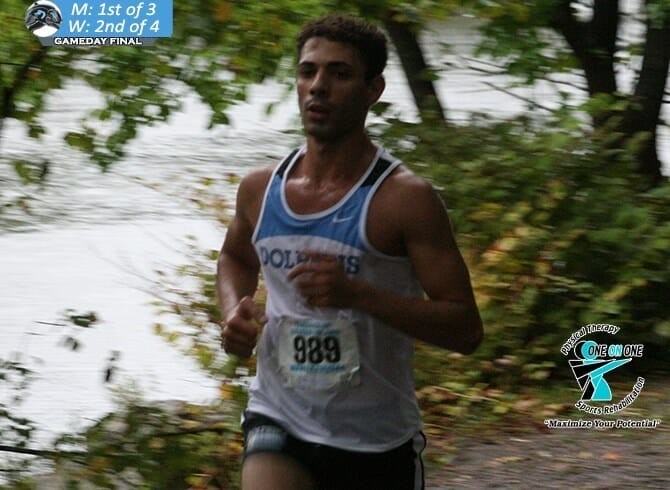 In what will be CSI’s final meet before their CUNYAC Postseason Championship Meet, the Dolphins fared well in the NYC Quad Meet held at Van Cortlandt Park this morning.  The CSI men fared first among the three competing schools, while the women took second among four competing schools.

On the women’s side, the four squads, consisting of CSI, John Jay, Baruch and Old Westbury, participated in a 6k race and the Dolphins finished second overall with 55 points, behind John Jay’s 22 points to lead the way.  Baruch finished third with 71 markers while Old Westbury finalized with 74 points.  CSI’s Tristiana Adragna was the force for the Dolphins, coming in at 28:30.3, the second fastest of all runners, and CSI’s third-fastest 6k time this season.  Veronica Lorenzo placed 9th overall for CSI with a solid time of 32:39.10, and Victoria DeBernardo also came in the top half among runners with a time of 33:51.12, good for 11th overall.

CSI’s 26 points on the men’s side was the winning score among the three teams, with John Jay placing second at 35 points, and Baruch third with 65.  Luke Jackson continues to shine, winning another race outright with a time of 30:18.  Liam McMunn was third in the class of runners at 31:03, while Khaled Halwani was fifth (32:40) and Kenneth Morella seventh (33:02).  Also in the top 10 was Erik Sanchez who came in at 34:08.

Up next for the Dolphins will be the match that means the most.  Both squads are back at Van Cortlandt Park for the CUNYAC Postseason Championship on Sunday, October 30.