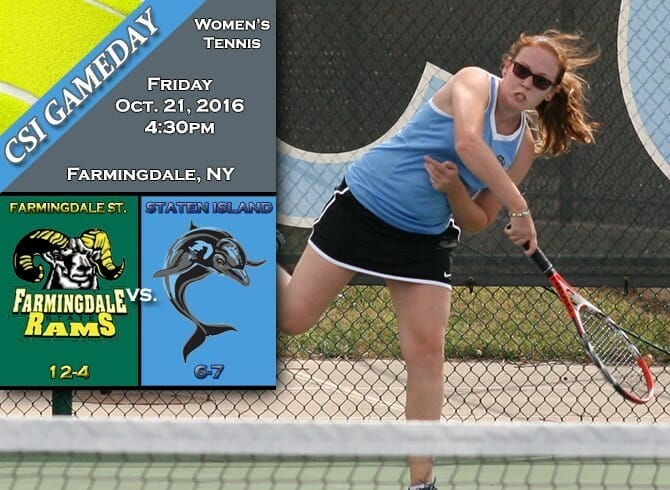 The College of Staten Island women’s tennis team will officially close their 2016 regular season this afternoon, when they face Farmingdale State College in non-conference play in Farmingdale at 4:30pm.  This is make-up from a previously postponed contest earlier in the season.  For the Dolphins it will be a chance to get to .500 before the CUNYAC Playoffs start on Sunday.

CSI vs. FARMINGDALE STATE COLLEGE AT-A-GLANCE
Matchup:  CSI (6-7 Overall, 4-2 CUNYAC) vs. Farmingdale State College (12-4 Overall, 6-1 Skyline)
Where: Farmingdale State Tennis Courts – 2350 Bradhollow Road, Farmingdale, NY
First Serve: 4:30pm
Last Year’s Result:  CSI won, 5-3
Players to Watch (CSI): Tristian Adragna has now won CUNYAC Rookie of the Week three times this season and with a win in CSI’s last outing she is 9-3 overall this season.  Michelle Kushnir will also look to lead the Dolphins as she has some familiarity against the Rams roster from a season ago, along with No. 1 Singles player Nozima Toshpulativa.
Players to Watch (FSC): The Rams are having a sensational season, and are led by the singles play of Kayla Reidy, who boasts a 13-3 overall record mostly at the Nos. 4-5 positions.  Tatiana Rosamilia is 11-4 overall and plays a majority of the time at No. 2.  Quirat-ul-ain Rai is 11-3 at the No. 3 position.
News and Notes:  The Dolphins and Rams have been playing against one another for several years now.  CSI won last year, 5-3, and also won in 2013 by a slim, 5-4, margin.  Farmingdale’s last win in the series came back in 2012 at Farmingdale, 5-4.  The Rams are currently on a six-match winning streak, and boast wins over CUNYAC rivals Baruch and Brooklyn College in that span.