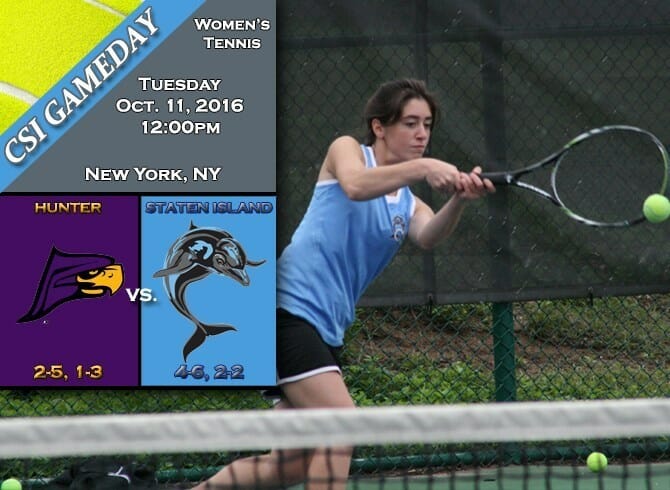 The College of Staten Island women’s tennis team head to New York, NY this afternoon for a CUNYAC clash against their rivals, Hunter College at 12:00 pm. The Dolphins are 1-2 over their last three matches and will look to pick up their third CUNYAC win this afternoon to improve their seeding as the season begins to come to a close.

CSI vs. HUNTER COLLEGE AT-A-GLANCE
Matchup:  CSI (4-6 Overall, 2-2 CUNYAC) vs. Hunter College (2-5 Overall, 1-3 CUNYAC)
Where: Hunter College – USTA National Tennis Center, New York, NY
First Serve: 12:00pm
Last Year’s Result:  CSI won, 7-2
Players to Watch (CSI):  Tristiana Adragna has now won CUNYAC Rookie of the Week twice and will look to show her skills this afternoon against the Hawks.  Adragna is also a perfect 5-0 in CUNYAC play, playing in the two, three and four spot this season. Dana Friedman is another highly touted rookie on the Dolphins squad as she boasts a 3-4 overall record with a 2-1 CUNYAC record.
Players to Watch (HC): No Statistics Available
News and Notes:  The Dolphins are just 2-3 against the Hawks in the last three matches, however the Dolphins won the most recent match up last season 7-2. CSI is 2-3 while playing away from their home courts this season while the Hawks are 1-1 at home.