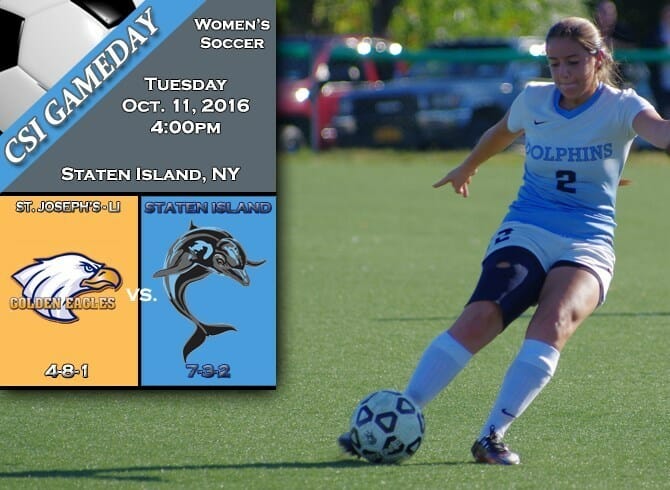 CSI vs. ST. JOSEPH’S COLLEGE – LONG ISLAND AT-A-GLANCE
Matchup:  CSI (7-3-2 Overall, 3-0 CUNYAC) vs. St. Joseph’s College – LI (4-8-1 Overall, 3-2-1 Skyline)
Where: CSI Soccer Complex – 2800 Victory Boulevard, Staten Island, NY
Live Video:  http://www.csidolphins.com/CSISportsNet
Live Stats:  http://www.sidearmstats.com/csi/wsoc/
All-Time Series:  SJC-LI leads 6-2-1
Last Year’s Meeting: CSI won 2-1
Players to Watch (CSI):  Krystina Rodriguez is putting up CUNYAC Rookie of the Year type numbers this season.  Rodriguez has four goals on the year and eight assists while leading the team with 65 shots.  Jennifer Cosenza has been the beneficiary of Rodriguez’s great play as Cosenza has been on the end of a lot of Rodriguez’s passes allowing her to lead the team with seven goals.
Players to Watch (SJC-LI): Christina Gagliardi leads the Golden Eagles with eight goals this season while also pacing the team with three assists. Juliana Cintron-Leonardo has started just two games this season but has two of the team’s four shutouts under her belt.  Cintron-Leonardo has allowed just one goal against her while making 10 saves.
News and Notes:  The Golden Eagles will come into today’s game with a 4-8-1 overall record however they are 1-2-1 over their last four games.  Surprisingly, the Golden Eagles have been better on the road this year with a 3-2 record while posting a 1-6-1 record at home. St. Joseph’s – Long Island and Staten Island share a common opponent in Stockton University who the Dolphins most recently tied 0-0 while the Golden Eagles fell 3-0.  The Golden Eagles have dominated the Dolphins in the series, posting a 6-2-1 record all-time against the Dolphins.  CSI is allowing less than a goal a game against this season while averaging three goals a game for themselves.  Six of the Dolphins’ 9 shutouts have come on their home turf this season and will look to continue their dominating defensive performance this afternoon.