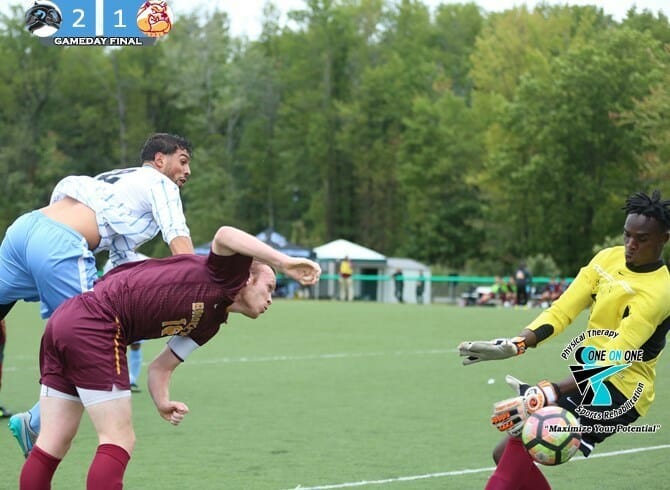 GAME VIDEO – POSTGAME INTERVIEW – GAME HIGHLIGHTS -The College of Staten Island men’s soccer team was able to withstand wave after wave of attacks by Brooklyn College in the final five minutes of the game to walk away with their third CUNYAC win of the season with a 2-1 win over the Bulldogs.  CSI moves to 6-3-2 overall while improving to 3-1-1 in the CUNYAC.  The loss drops the Bulldogs to 5-6-1 overall and 2-1-1 in the CUNYAC.

The Dolphins had to withstand several attacks from the Bulldogs early in the game.  The Bulldogs were constantly in the Dolphins’ third of the field moving the ball but were unable to find the final ball to crack the Dolphins’ defensive line.  When the Dolphins were able to get a hold of the ball and make an offensive attack they nearly put one in the back of the net.  Ali Farers threaded a ball through to Marcin Klim to put him in on goal.  Klim would try to slip one far post past Jerron Streete, however Streete was able to make a leg save to keep the game locked at 0-0.

In the 18th minute of play the Dolphins seemed to have gone up 1-0 however the sideline official raised his flag for an offside, nullifying Klim’s 10th goal of the year.

CSI would finally find the back of the net after settling into the game and playing to their style.  Ruben Diaz would head one home off of a pass from Fedortsi and Youssef Aly for the first goal of the game. CSI started to get more possession in this game to move it to an even 50-50 split in the first half.  The Bulldogs nearly found a kink in the Dolphins’ wall when a free kick curled in and Valentyn Kharko shanked one wide from four yards away.

At the half the Dolphins held a 1-0 lead via a Diaz header, his first of the year.  As they’ve done all year, CSI outshot Brooklyn 11-3 while also holding a 3-1 edge in corner kicks.  After allowing Brooklyn to hold a majority of the possession in the first 20 minutes, the Dolphins were able to battle back and hold control of the ball to end the half with a 55-45 edge in possession.

Once the second half got underway the game began to become even more physical. The Dolphins were able to double up just six minutes into the second when Vasyl Fedortsi fed one through to Kurtesi who curled one far post for his third of the year.
The extra physical play started to leading to the showing of yellow cards.  Adrian Cosovic and Kurtesi were both issued yellow cards for hard fouls against Brooklyn players.

Brooklyn was finally able to crack the code that is Staten Island’s outstanding back line. After the ball went out of bounds for a corner kick.  Kharko curled the corner onto the penalty kick spot where Omer Capoglu was able to get a head on it and head it far post upper 90 to shrink CSI’s lead to 2-1.

After the Dolphins allowed that goal they picked up their offensive play even more.  Cosovic would crank a rocket off of the near post which ricocheted out of bounds and kept the game at 2-1 in favor of the Dolphins. Dardan Nika nearly gave the Dolphins a 3-1 lead but once again Streete came up with a big save to keep his team just one goal down.

As the clock continued to wind down you could see the Dolphins doing everything they could as the Bulldogs were in all-out attack mode, searching for that tying goal.  The time would not tick away fast enough as the last five minutes of the game felt like an eternity for the Dolphins.

In the end, CSI was up to the task and picked up a big CUNYAC win and gave Brooklyn their first CUNYAC loss of the season.

CSI will return to action on Monday, Oct 3 where they will travel to Ewing, NJ to take on The College of New Jersey in a non-conference game.