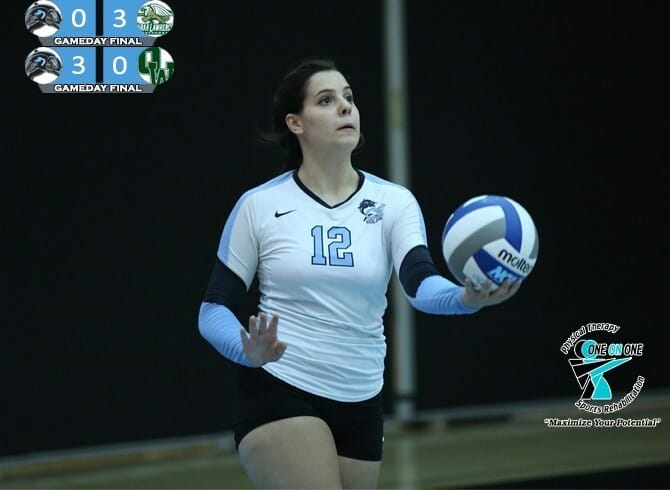 The College of Staten Island women’s volleyball team traveled to Bronxville, NY this morning to take on Sarah Lawrence College and Old Westbury in a non-conference tri-match.  CSI went into the tri-match 3-7 and emerged 4-8 after splitting games.  CSI fell to Sarah Lawrence 3-0 in their first match of the day then moved on to take down Old Westbury 3-0 in the second.

The Dolphins battled early on keeping in close in the first set after a pair of kills by Siobhan Granich.  The Gryphons would find the Dolphins’ weak spot and exploit it to go on a 4-0 run as they were able to collect three service aces.  Down four the Dolphins would go on their own run to tie the set up at eight apiece before eventually taking a 13-10 lead midway through.

CSI’s offense would stall and only go on to score three more points in the set while the Gryphons would take charge and finish the set off with a 25-16 victory to take the first set.

CSI would once again fall behind in the second set due to miscues on the defensive end on serves.  Granich would bring her team back though to tie it 5-5.  The Dolphins struggled to manage with the Gryphons’ potent offense.  Sarah Lawrence would hit .394 with 14 kills and one error in the second set, their highest numbers of the match.  CSI’s highest numbers of the match also came in this game with a .192 hit percentage and eight kills with just three errors.

Despite their improvement on the offensive side of the ball the Gryphons were just too much for the Dolphins which led to their 25-12 loss in the second set.

The third set saw the Dolphins score their lowest number of points for the whole match.  CSI fell 25-10 in the third and final set as the Gryphons would rip off an 11-0 run to give them a huge 14-4 lead.  The Dolphins did their best to find their way back into the match but were unable to muster a comeback.

Staten Island took their loss out on Old Westbury in their second match of the tri-match.  The Dolphins were led by Skenderjie Mila in this match as she spread 14 kills out over three sets for a team high.

In the closest set between these two teams the Dolphins were able to come out on top with a 25-22 win. This opening set was a battle through and through with the score flip flopping back-and-forth.  CSI was finally able to gain control of the set when they went on a 7-2 run to take a 15-9 lead.  The women have struggled holding onto leads this season and Old Westbury was able to rally back into the match and tie it up 20-20.  Jessica Cafiero would give the Dolphins a 22-20 lead with two straight service aces.

Old Westbury was able to sneak within two points of the Dolphins towards the end but Vanessa Reyes would come up with a big kill to end the set and put the Dolphins up 1-0 for the match.

Victoria Wong got things going for the Dolphins in the third set with three straight aces which caused Old Westbury to call a timeout to try and cool Wong off.  The icing strategy would not work here as Wong would serve four more times after that all ending with a Mila kill.  The streak would finally end with a serving error but CSI would have a big 14-5 lead.

Old Westbury would not go quietly as they would come back into this set and trail the Dolphins just 17-19 towards the end.  The streak caused the Dolphins to call a timeout to regain themselves and finish out this match. Cafiero set her teammates up for success at the end of the set with two straight assists to put her team up four over their opponents.

Mila would seal the deal with a kill to give the Dolphins a 25-21 win.

The Dolphins will return to action on Wednesday, October 5 against Mount St. Mary at 7pm at the CSI Sports & Recreation Center.