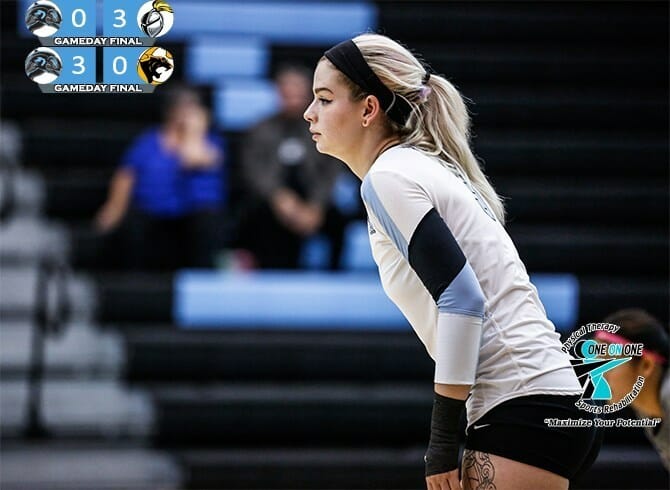 The College of Staten Island women’s volleyball team hosted their final tri-match of the season this afternoon at the CSI Sports & Recreation Center.  The Dolphins opened up the tri-match against New Jersey City University at 12:00 pm and fell in three straight sets.  Staten Island would go on to close out the day with a 3-0 win over Medgar Evers College to improve to 7-14 overall.

The Dolphins and Gothic Knights met for the eighth time in their history with the Gothic Knights holding a 6-2 edge.  CSI has struggled against NJAC opponents this season, going 0-3 against those teams.

The first set was a hard fought battle that saw a number of lead switches throughout the set.  After holding a 15-14 lead thanks to kills by Siobhan Granich and Skenderjie Mila, the Gothic Knights would go on a 5-0 to take a 19-15 lead over the Dolphins.  Staten Island rallied back to tie the opening set up a 20-20.  The end of the match had the fans on the edge of their seats as both teams continued to put on a clinic in defending as neither team wanted fall behind this late in the set.  In the end, it was the Gothic Knights who came out on top with a 25-23 win to take a 1-0 lead in the match.

Vanessa Reyes (.214) and Granich (.042) led the offense for the Dolphins with six kills each.  Victoria Wong secured 10 digs from the back line while Jessica Cafiero tallied 17 assists.

The Cougars were much improved from their meeting earlier in the year.  The Cougars hung around with the Dolphins and were able to knot it up 10-10 mid way through the set.  CSI would rip off a 10-1 run to end the set and take a 1-0 lead in the match.  Wong was able to collect two aces over that stretch to help aid the Dolphins in their win over the Cougars.

Once again the Cougars stayed in the set. Cassidy Iannariello was able to give CSI a 12-6 with her tricky serves.  Caitlin Esposito also tallied a pair of kills over that stretch. Trailing 17-11 the Cougars served up three service aces to climb back into the set and trail just 17-18.  Granich and the Dolphins would not allow the Cougars to come back into the set and would go on a 7-1 run to win the second set 25-18.
In the third set the Cougar had seemed to find their form.  The Cougars would jump out to a 9-4 lead over the Dolphins.  CSI would send in their ace, Iannariello to help the Dolphins gain control of the game.  Iannariello would serve seven straight times with three of them ending with kills by Reyes and Granich.  With the Dolphins in control of the set, they were able to play to their style which would allow them to cruise to a 25-14 win in the final set of the afternoon.

CSI will return to action on Tuesday, October 25 for their senior night against Baruch College at 7:00 PM at the CSI Sports & Recreation Center.