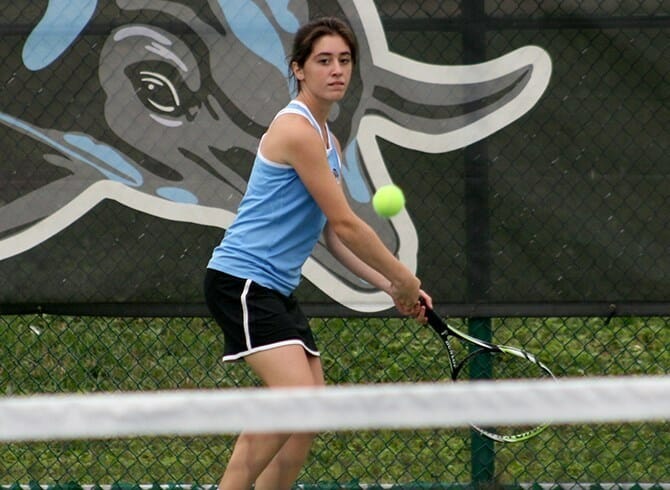 BOXSCORE – The College of Staten Island women’s tennis resumed action after a six-day layoff, and looked strong, posting a 6-0 win over visiting Rutgers-Newark as part of non-league play at the CSI Tennis Center.  The Dolphins lifted to 6-6 overall on the season, while the Scarlet Raiders fell to 4-7.

Play started with doubles, which took a lengthy time to complete thanks to even play at both No. 2 and No. 3 positions.  In the top slot, the CSI duo of Nozima Toshpulatova and Tristiana Adragna were more than efficient in an 8-2 win.  It was more of grind-it-out affair down at No. 3, where CSI pulled away late in an 8-6 win by teammates Aziza Jurabaeva and Guetanie Romain.

In the No. 2 position, the CSI duo of Michelle Kushnir and Dana Friedman were locked in a battle with RU tandem Marthalyn Johnson and Jamie Lee Buhain.  The Raiders got an early lead and then started to cruise before CSI shifted momentum.  A broken serve later, CSI was back in it, and at the end of it all, CSI was able to score a big 9-7 win to take a commanding, 3-0, lead in the match.

By the time singles play started, the teams were almost two hours into their match and darkness started to creep in quickly.  Thankfully for the Dolphins, Adragna stayed red-hot, winning her sixth straight singles match, this time at the No. 3 position, 6-0, 6-0, to give CSI a quick 4-0 edge and moments later, Kushnir was able to defeat Jessica Smoot, 6-3, 6-0, to clinch the win.

Toshpulatova added a win for CSI but the final three flights at Nos. 4-6, were all forced to be left unfinished due to darkness.  At the time, CSI had won a set in two of the three flights.

The Dolphins will next play William Paterson University, Wednesday afternoon, at 3:30pm, in their final regular season home game.