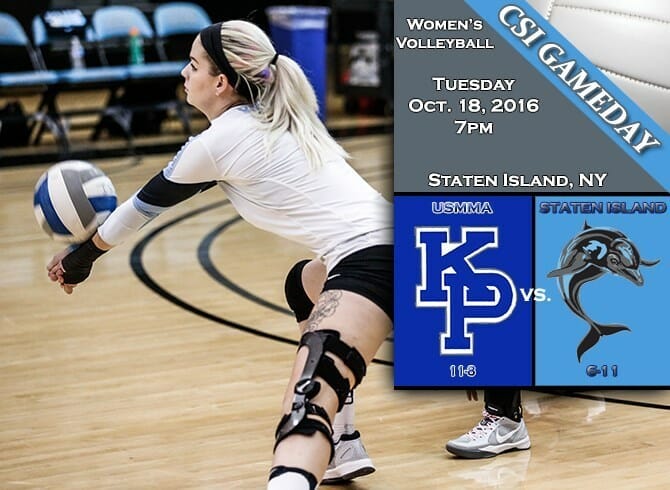 The College of Staten Island women’s volleyball team is back in action at the Sports & Recreation Center tonight, and they will take on the United States Merchant Marine Academy at 7pm.  The Dolphins are coming off of a non-conference tri-match split this weekend and tonight’s match continues their non-conference slate.

CSI vs. U.S. MERCHANT MARINE ACADEMY AT-A-GLANCE
Matchup:  College of Staten Island (6-11 Overall, 3-3 CUNYAC) vs. U.S. Merchant Marine Academy (11-8, 4-1 Skyline)
Where:  Sports & Recreation Center – 2800 Victory Boulevard, Staten Island, NY
First Serve: 7:00pm
Live Video:  http://www.csidolphins/CSISportsNet
Live Stats:  http://www.sidearmstats.com/csi/wvball
All-Time Series (Since 2000):  USMMA leads, 5-1
Last Meeting:  USMMA won 3-1 on 10/19/15
Players to Watch (CSI): Siobhan Granich had a huge week last week, including a 22-kill performance against Sarah Lawrence and she will be looked at to steady the attack.  Vanessa Reyes has also been active on the front line, as has Skenderjie Mila, as she is third on the squad in kills.  Victoria Wong is the anchor in the back, easily leading the team with 297 digs.
Players to Watch (USMMA):  The Mariners have three attackers who have posted 130+ kills, led by Dominique Pope’s 182.  Kayla Gleason and Kate Lefler are also prominent up front and will look to lead the way tonight.  Nicole Ibinson and Kyleigh Kappas are pacing the team with 32 aces apiece while Gabby Marionakis leads the squad in defensive digs with 175, followed closely by Pope’s 182.
News and Notes: Tonight marks the first time since 2009 that the teams have met at CSI.  That year USMMA won their first of three in a row in the series.  CSI took the only match in the series way back in 2008, a 3-1 affair in Staten Island.  The Dolphins are 1-1 all-time at home against the Mariners.  Last year marked the first meeting in the series since 2011, and was won by the Mariners, 3-1.  The Dolphins are 2-5 at home this season while USMMA is 6-6 in games played away from their home court.  The two teams share similar opponents this season.  Both teams beat Old Westbury and fell to both Rutgers-Newark and Farmingdale State.  USMMA has played Lehman College twice and won both meetings, 3-0.  CSI fell to Lehman earlier this season, 3-2.