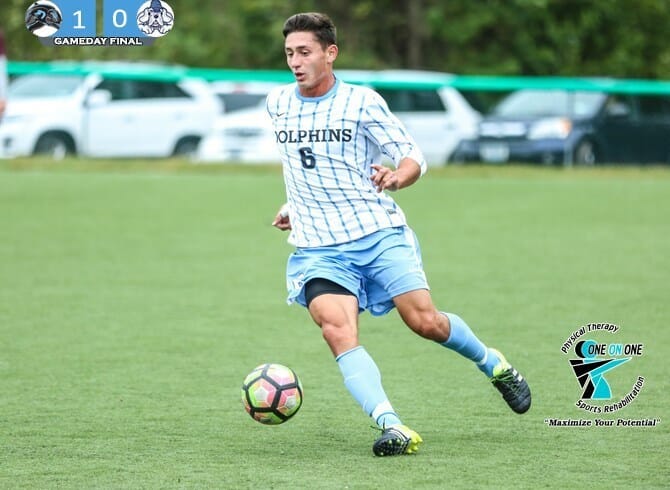 In what was the final CUNYAC regular season contest for both sides, the College of Staten Island men’s soccer team managed to cap things on a positive note, taking a modest, 1-0, win over John Jay College in a match played this afternoon at Randall’s Island.  CSI lifted to 9-6-2 overall and 5-2-1 in the CUNYAC, while the Bloodhounds finalized at 3-13-1, 2-5-1, respectively.

The win was a big one for the Dolphins, who clinched a CUNYAC Quarterfinal home game next week, by virtue of their finishing in a tie for third place in the standings.  Due to tiebreaker, CSI will earn the No. 4 seed in the six-team Tournament, and will host No. 5 Brooklyn College on Wednesday of next week to usher in postseason play.

To earn that right took time and patience, as CSI could not register in the first half despite 11 shots, five on goal. Alexandre Taliotis was up to par for the Bloodhounds, and CSI keeper Jake Foeldes made three saves of his own to keep the sheet clean in the opening stanza.

Play opened up in the second half, especially after the 49th minute.  There, CSI’s Mohamed Ndao was able to skirt across a pass to an open Dardan Nika, who used his speed to create separation on a breakaway, and when he was one-on-one with Taliotis, he blasted it into the net for the 1-0 advantage.

John Jay was forced to press from there and that led to more Dolphins chances, but the Dolphins would not be able to break through again.  Nika in particular would finish with a season-high 9 shots, six on goal, but Taliotis would finish with 13 saves in the game to keep the game close.  Foeldes earned six total saves in the shutout win, his sixth solo shutout of the year.

CSI will have one more regular season game on Sunday, when they tale to the road to face Arcadia University on Saturday at 2:30pm.

Six teams make the CUNYAC Tournament that starts next week.  The top two seeds earn a bye, while teams seeded 3-6 will face off in quarterfinal play.  CSI finished tied with CCNY for third place with a 5-2-1 CUNYAC mark, but by virtue of their 1-0 win over CSI, CCNY will have the No. 3 seed while CSI will be relegated to No. 4.  They will face No. 5 Brooklyn College next Wednesday.  CSI defeated Brooklyn during the regular season, 2-1.