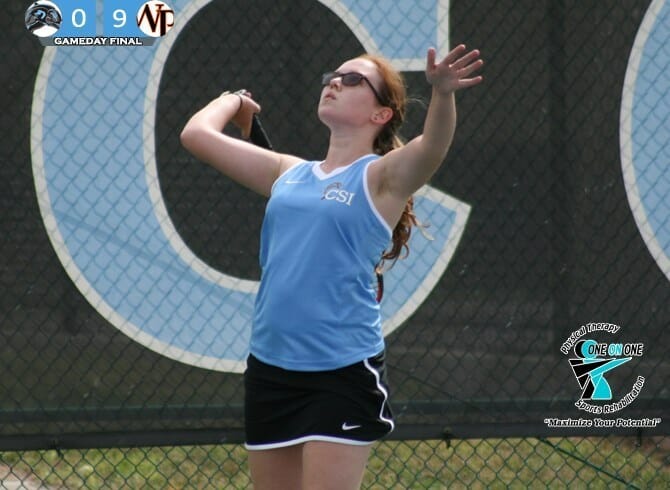 The College of Staten Island women’s tennis team dropped their final home regular season game of the season this afternoon, falling hard to visiting William Paterson University as part of non-league play, by a lopsided 9-0 count.  The Dolphins fell to 6-7 overall, while the Pioneers lifted to 2-8.

Despite the final score, the match started with three competitive doubles matches, but CSI felt the brunt of missing two premier freshmen from their lineup in Tristiana Adragna and Dana Friedman.

The Pioneers took No. 2 doubles, 8-2, but the other two flights did not come easy for the visitors.  In the top spot, CSI pair Nozima Toshpulatova and Viktoriya Volkova gave Brittany LaBruna and Brianna Boyd all they could handle, but in the end it was the WPU pair taking an 8-5 win.  Down at No. 3, CSI had momentum for a bit as Michelle Kushnir and Kai Wen Wong went stroke for stroke with Stephanie Doot and Michele Boyle, but again WPU would outlast CSI, taking an 8-6 winner there.

When play shifted to singles, WPU coasted towards the bottom of the order, but there was some great tennis to be had at the top.

The Dolphins will officially end their regular season on Friday, when they travel to face Farmingdale State at 4:30pm.  After that, they usher in the CUNYAC playoffs with a quarterfinal match against Hunter College on Sunday at 1pm.