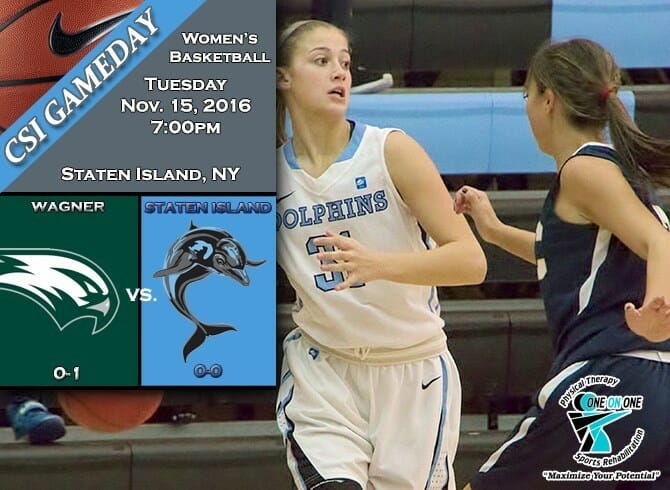 The College of Staten Island women’s basketball team will open their 2016-17 campaign tonight against Division I opponents Wagner College for the first time in school history.  Tonight is the Battle of Staten Island which pits the Dolphins against the Seahawks in a showdown for bragging rights.

CSI vs. WAGNER COLLEGE AT-A-GLANCE
Matchup:  CSI (0-0 Overall, 0-0 CUNYAC) vs. Wagner College (0-1 Overall, 0-0 NEC)
Where: Spiro Sports Center – 1 Campus Rd., Staten Island, NY
Tip-Off: 7:00 pm
Live Video: http://necfrontrow.com/webcast.php/WC-3880/
Live Stats: http://www.sidearmstats.com/wagner/wbball/
All-Time Series:  First Ever Meeting
Players to Watch (CSI):  The Dolphins return both of their first-team CUNYAC All-Stars from a season ago in Christina Pasaturo and Samantha Flecker.  Also, returning to the court after missing all of last season is Victoria Crea.  The trio will look to start this Battle of Staten Island off on the right foot with a win tonight.  Pasaturo finished last season averaging 18.2 ppg, 6.4 apg and 6.5 rpg, while Flecker was second on the team with 15.6 ppg and led the way with 8.4 rpg.
Players to Watch (WC): Leading the team this season for the Seahawks is Africa Williams and Kellie Crouch.  Williams and Crouch both scored 10 points in their season opening loss to NJIT. Corinn Baggs will protect the glass as she currently leads her team in rebounds this season.
News and Notes:  The Seahawks are in their first year under new head coach Heather Jacobs. The Seahawks are susceptible to turnovers as they committed 23 in their first game of the year.  The Dolphins had quick hands on defense last season and averaged 13 steals per game so look for that margin to be a key factor in tonight’s showdown. The Dolphins play style is built around the three-point arc which will be the determining factor in tonight’s contest.  CSI buried 31% (185-595) of their three-point shots last season and averaged seven a game. Last season the Dolphins improved as the game went on as they scored 521 of their 2030 total points last season in the third quarter. The Seahawks will use their size to their advantage tonight as the Dolphins have just one six footer in Rosa Perone at their disposal while Wagner has three.