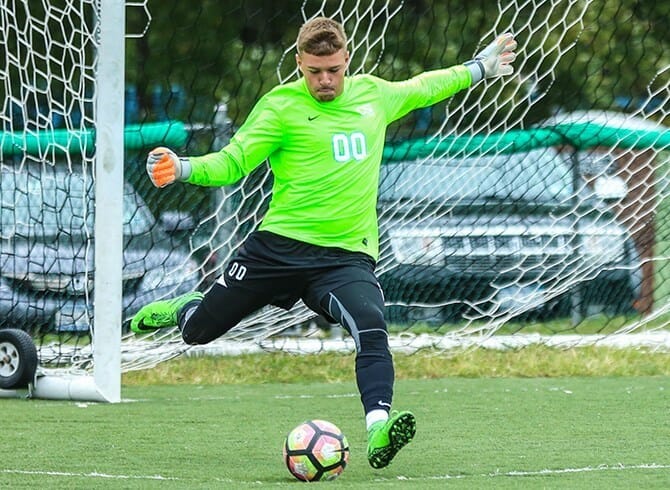 The City University of New York Athletic Conference released its 2016 All-Star teams and the Dolphins earned a cluster of honors, highlighted with Rookie of the Year honors to freshman keeper Jake Foeldes.  Joining Foeldes on the 1st-team were defensive teammates Ruben Diaz and Jacob Szumanski, midfielder Vasyl Fedortsi, and forward Marcin Klim.

Foeldes, a CUNYAC Rookie of the Week and Defender of the Week during the season had a superb season, posting a 10-7-2 record with a miniscule 0.71 goals against average in 19 starts.  He boasted a save percentage or .831, making 64 saves.  He registered seven solo shutouts, combining with senior Antonio Lynch for another trio of combined clean sheets.

One of the reasons for Foeldes‘ exceptional campaign was the play of his stout back line, composed of senior combo Ruben Diaz and Jacob Szumanski.  Szumanski was a three-time CUNYAC Defender of the Week while Diaz also took the honor once and was the Defender of the Year in 2015.  CSI allowed just 17 goals in 22 games, allowing just 222 shots to CSI’s 396.  Szumanski would finish with six shots on the season, while Diaz collected a lone goal on 9 attempts at goal.

“I’m thankful that the hard work that I put in throughout the season has really paid off and that the coaches recognized my hard work as well,” said Foeldes.  “My coaches were able to really refine my skills to make me into the goalie I was at the end of the year.”

What the duo did for defense, senior Marcin Klim provided for on the front line.  Klim led all CSI scorers with 11 goals, and his two assists gave him a team-best 24 points.  His 47 shots placed second on the squad, while his two game-winners were tied for second on the team.  Klim finished his CSI career with 29 goals, good for a tie for 5th all-time at the College.

Midfielder Vasyl Fedortsi was a part of the defensive lockdown in the midfielder, lending himself to the attack as well with 23 shots, good for a tie for 6th on the squad.  He would add a lone assist.

Standing beside the first-team All-Stars was Ryan Layman, who was named to the All-Sportsmanship Team by the CUNYAC, as an ambassador for proper sportsmanship and team leadership.

The Dolphins enjoyed a quality 2016 campaign, one that resulted in a 12-8-2 overall record, a trip to the CUNYAC Semifinals and an ECAC Regional Championship.