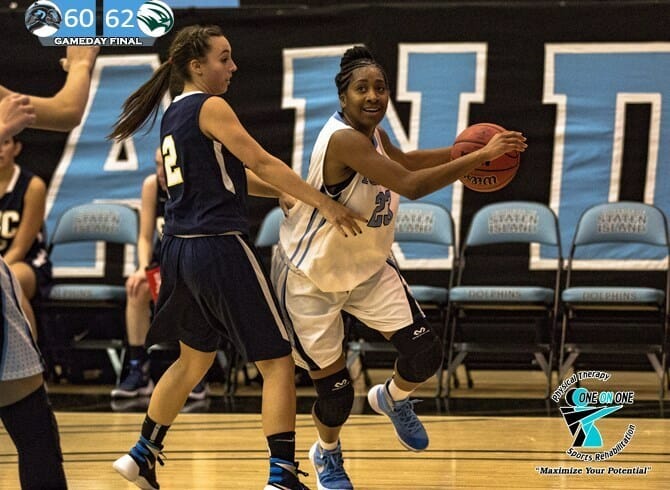 The College of Staten Island women’s basketball team opened their 2016-17 campaign in the first ever Battle of Staten Island tonight against NCAA Division I Wagner College at the Spiro Sports Center in Staten Island, falling just short to the host Seahawks, 62-60.  With the win the Seahawks leveled to 1-1 on the young season while the Dolphins fell to season-opening 0-1.

Angelique Price got the Dolphins started in this newly formed rivalry, scoring four of her team’s first eight points to give put CSI up 8-7 over their Division I rivals after opening up a modest, 7-3, lead. The Seahawks began to catch fire as the first quarter started to come to a close and took a 12-8 lead after CSI’s shooting sunk to 20%. With two minutes left in the first quarter the Dolphins found themselves on the wrong side of an 8-0 run.  During that run the Dolphins missed eight straight shots which allowed the Seahawks to control the game.

Both teams seemed content living behind the arc in the first quarter with the Seahawks having more success, shooting 40% (4-10) compared to 16% (1-6) by the Dolphins.  Wagner College went on to finish the first quarter on a 15-1 run, giving them an 18-8 lead heading into the second quarter.

At the media timeout break the Seahawks had doubled their lead over the Dolphins as CSI continued to struggle from downtown. Wagner’s ball movement continued to fool the Dolphins’ defense which allowed open looks from behind the arc. Rosa Perone got herself into foul trouble early and her absence allowed the Seahawks to get second chance opportunities. In one of the game’s first half highlights, Victoria Crea narrowed the Seahawks lead down to 14 with 30 seconds remaining in the half with a fast break lay-up, her first field goal since a season-ending injury prevented her from playing a year ago.

Still, the Dolphins trailed the Seahawks 36-22 at the break.  Christina Pasaturo led the scoring for Staten Island with seven points on 2-8 shooting from the floor.  Bench play was the name of the game for the Seahawks, as the Dolphins were out-scored 19-0 by Wagner’s bench players.  The Dolphins shot just 2-12 from behind the arc.

The halftime break was just what the Dolphins needed, however, and the visiting side turned up the pressure and started to swing momentum in their favor.  With the return of Perone the Dolphins gained a presence inside the paint and opened up shots out wide.  CSI opened the second half on a 13-0 to cut the lead to just one. Samantha Flecker recorded five points on the run for the Dolphins, with two lay-ups and a free throw.  Wagner snapped their scoreless streak with a Sydney Sabino three, but after trading points, CSI got their first lead since the opening stages via a Flecker lay-up that made it 42-41 with 35 ticks left in the third stanza.

Angelique Price hit a pair of buckets to start the fourth period, the second a three to give CSI their biggest lead, 48-43.  WC’s Kellie Crouch however, would come down the court and bury a three of her own to keep the game within two points, 48-46, and moments later another Sabino three gave the Seahawks back the lead, 49-48.

Down by three with three minutes remaining, CSI’s Pasaturo drove to the basket and converted the lay-up to make it a one point game.  CSI would later tie the game at 56-56 after Crea gave a superb bounce pass to Perone for an easy layup. Wagner College would not bow out so easily, especially on their home court.  They kept feeding the ball to Tanasia Russell and she would deliver, first with a jumper to give her team the lead, 58-56.  CSI came right back down the floor and Flecker cashed in a three-point play, but on the ensuing possession Perone was whistled on a foul on an off-balance Russell jumper and Russell would knock down the two freebies to give her team the 60-59 lead at 34 seconds that it would hold onto.

CSI did have its final chances.  With under 30 seconds left, Crea lost the handle on a baseline dribble, giving the ball back to the Seahawks.  After Julia McClure hit free-throws, CSI was down to a last possession and a three-point attempt but Pasaturo missed the shot with five seconds remaining, sealing the deal for the Seahawks.

CSI will be back in action on Saturday, when they debut on their home floor against Western New England in non-conference play.  Tip-off is scheduled for 2:00pm.