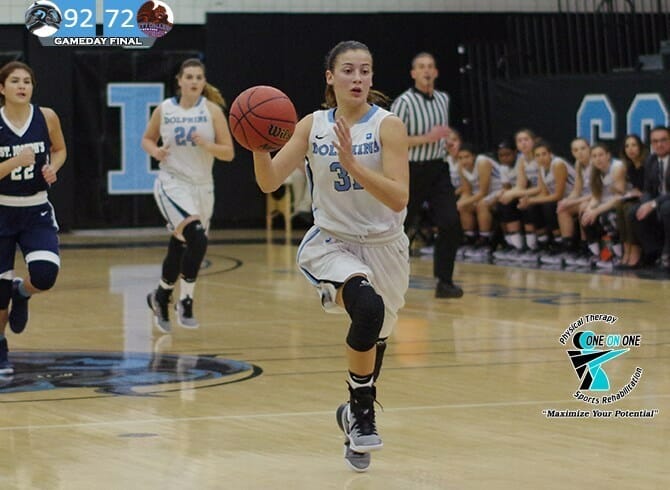 The Dolphins outscored the Beavers 52-23 in the second half enroute to a 92-72 victory after trailing 40-49 at the half.  After missing much of the first half after getting into foul trouble early, Samantha Flecker came into the game and made in instant impact.  Flecker cleaned up the boards and collected a career high 16 rebounds which stopped the Beavers from getting second chance opportunities.  Christina Pasaturo and Angelique Price also teamed up to score 50 of the Dolphins’ 92 points tonight after catching fire in the second half.

Staten Island trailed the Beavers for much of the first half as they couldn’t get their offense flowing while CCNY’s was firing on all cylinders.  The Beavers would outscore the Dolphins 24-19 in the opening stanza after shooting a blistering 50% from the three-point line.  CCNY deployed a face-paced offense much like the Dolphins’ style of play but the Beavers had the advantage early on as CSI struggled from downtown.

Pasaturo nearly gave the Dolphins the lead again with a three early in the second to bring them within one of the Beavers, however the Beavers would score four unanswered to stay just out of reach of the Dolphins. CCNY would extend their lead to as much as 10 before heading into the locker room at the half.  The difference maker in the first half was the free throws as CCNY was 17-22 from the line while CSI was just 3-9.  Trailing at the half for the first time all season to a CUNYAC team, Head Coach Tim Shanahan knew he needed to deliver a motivating half time speech to get his team ready for the second half.

The women came out in the second half and lit the court on fire.  The Dolphins defense became stingy after allowing 49 points in the first half while their offense became more potent.  Victoria Crea finished the game with 18 points after collecting just four in the first half. Crea started to find chinks in the Beavers’ armor and took advantage of open lanes. Pasaturo was able to get going from behind the arc and was able to add 14 points to the 13 from the first half.

CSI opened the fourth quarter on an 11-0 run and never looked back. The Dolphins’ offense was firing on all cylinders while the Beavers couldn’t return to their first half success. The full court press finally took its toll on CCNY which led to the Dolphins cruising away with the game towards the end allowing them to stay perfect within the CUNYAC.

The Dolphins will return to action on Friday, December 9 where they will travel to Lehman College for yet another CUNYAC contest.