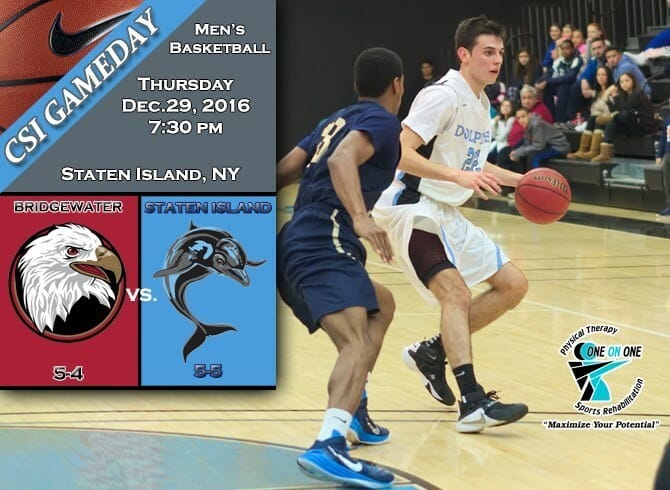 The College of Staten Island men’s basketball team is celebrating their 15th Annual Tournament of Heroes tonight at the Sports & Recreation Center. The action actually gets underway at 5:30pm, when Middlebury College takes on Illinois- Wesleyan in the opening game.  Following that, CSI will take center stage when they take on Bridgewater College for the first time in their history.  The Dolphins are defending a Tournament of Heroes Championship, having won the title for only the second time last year.

CSI vs. BRIDGEWATER COLLEGE  AT-A-GLANCE
Matchup: CSI (5-5 overall, 3-0 CUNYAC) vs. Bridgewater College (5-4 Overall, 0-2 ODAC)
Where: Sports & Recreation Center – 2800 Victory Boulevard, Staten Island, NY
Tip-Off:  7:30 pm
Ticket Info:  $5 General Admission
Live Stats:  http://www.sidearmstats.com/csi/mbball/
Live Video:  http://www.csidolphins.com/CSISportsNet
All-Time Series: First Meeting
Players To Watch (CSI):  The Dolphins’ balanced offensive attack is led by Frank Schettino’s 15.2 points per game.  Schettino is also one of the nation’s leaders in assists with 74 overall for 7.4 per game.  Earlier this year he tied a school record with 14 helpers.  Khaleeq Baum and Kevon Murphy have combined for a dutiful presence in the middle.  They are combining for over 23 points and 14 rebounds per contest and that production will certainly be called on tonight.  Look for Edin Bracic to be a force from the outside, as he has bagged a team-best 22 three-pointers this season, and is now averaging an even 10 points per contest.
Players To Watch (BC):  The Eagles have been getting sensational production from junior Bryce Boggs, who is averaging 18.8 points.  He is also third on the squad in assists and second in steals, averaging a team-best 33.8 minutes per contest.  Efe Balfour has been big on the interior, averaging 12.3 points per game with a team-best 7.6 rebounds per game and 9 blocked shots.  BC is averaging over seven three-pointers per game, so look for Kevin Saylor and Jesse Case to put up the long range shots.  They have combined to shoot 40-109 from downtown.
News & Notes:  This is the first meeting between the two sides in program history, and this marks Bridgewater’s first -ever entry into the Tournament of Heroes.  The Eagles are coming in on a two-game win streak, and are 2-0 within the Old Dominion Athletic Conference.  Tonight marks only their third road game of the season, although they have also played two games on neutral courts.  The Dolphins have been good on their home floor, sporting a 3-0 record at the Sports and Recreation Center and are 5-1 in their last six Tournament of Heroes games played here.  The Dolphins are 4-1 this season when they have won the rebounding war and are 5-1 when shooting over the 45% threshold, and they are shooting 50% here at home.  That will be tested against a strong defensive Eagles team.  In their five wins the Eagles are holding opponents to just 62.4 points per game and a 36.5% shooting mark from the floor.  Conversely, they have given up over 80 points in four losses, with opponents shooting over 41% in those games.  The Dolphins are 8-6 all-time in the opening round of the Tournament of Heroes and are on a six-game opening round win streak.