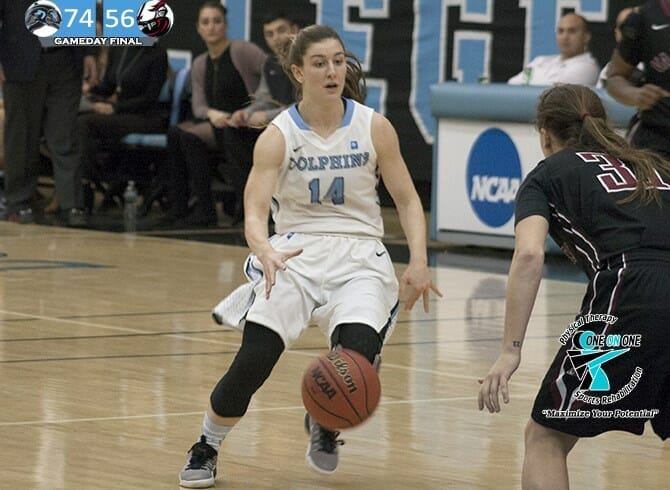 The College of Staten Island women’s basketball team picked up their sixth win in their last seven with a 74-56 win over Manhattanville College.  CSI returned home after a three game road stretch to improve their home record to 5-1.  The Dolphins improved to 8-3 overall while dropping the Valiants to 4-4 on the year.

The third quarter has been the Dolphins’ highest scoring quarter of the season so far and that trend continued tonight. Staten Island used a 23 point third quarter outburst to lift CSI over Manhattanville to improve to 14-8 all-time.  Christina Pasaturo has proven to be unstoppable over her last six games, scoring an average of 25 points per game.  Tonight Pasaturo paved the way with 23 points on 42% (5-12) shooting from the floor and a perfect 10-10 from the charity stripe. Victoria Crea and Samantha Flecker each added 17 points and seven rebounds, with the rebounds being a team high.

CSI ripped off a 10-1 run late in the second quarter.  Pasaturo and Nihada Bracic fueled the run which put the Dolphins up 33-23 at the half.  CSI came out of the locker room at half and wasted no time and jumped out to a 43-29 lead after an 8-0 run, putting the game out of reach for the Valiants.  Victoria Crea was able to get things started for the Dolphins when she found a lane and was able to lay one up for an easy basket. The Dolphins would not take their foot off of the pedal and kept the pressure on as they continued to force turnovers which gave them the ball back. In the third quarter the Dolphins were able to capitalize and score 9 points off of Manhattanville’s turnovers.

Manhattaville would go on to outscore the Dolphins in the fourth quarter, 21-18, but the Dolphins held too big of a lead for the Valiants to make a comeback.

CSI’s ranked defense was once again on display tonight and caused 26 turnovers and converted those turnovers into 27 points.  The Valiants however bested the Dolphins 24-22 in the paint while CSI was able to use their speed and outscore the Valiants 12-2 on fast break points.

The Dolphins will return to action on January 4, 2017 in a CUNYAC clash against Baruch College at the CSI Sports & Recreation Center at 5:30 pm.