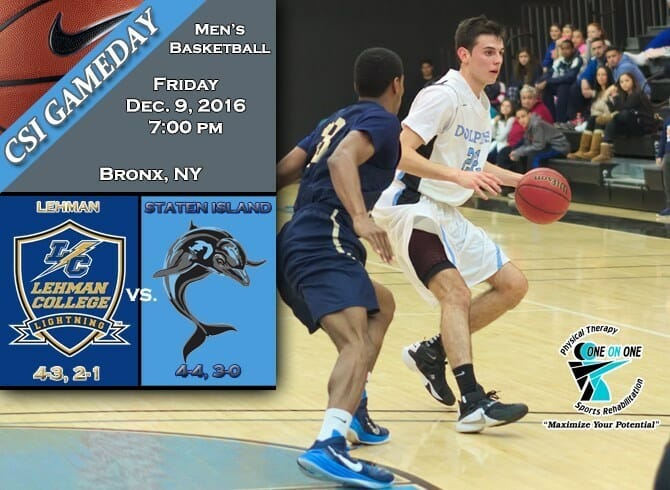 The College of Staten Island men’s basketball made it a perfect three-for-three this past Tuesday against conference opponents, now they will look for their fourth-straight conference win when they take to the road to take on Lehman College in the Bronx at 7pm.  The Lightning are looking for their third straight win overall, coming off of a big win against defending CUNYAC-Champion Brooklyn College.

CSI vs. LEHMAN COLLEGE OF NEW YORK  AT-A-GLANCE
Matchup: CSI (4-4 overall, 3-0 CUNYAC) vs. Lehman College (4-3 Overall, 1-1 CUNYAC)
Where: Apex Arena – 250 Bedford Park West, Bronx, NY
Tip-Off:  7:00 pm
Live Stats:  http://www.sidearmstats.com/lehman/mbball/
Live Video: http://www.lehmanathletics.com/watch/?Live=152
All-Time Series: CSI leads 49-14
Last Meeting: Feb. 16, 2016 – Lehman won 99-99
Players To Watch (CSI):  The Dolphins have four players averaging in double-figures, led by senior Frank Schettino’s 15.5 points per game.  He also added a school record 14 assists in a single game on Tuesday, and leads the Dolphins in that department with 59 total helpers.  Khaleeq Baum is next in line with 13.1 markers per game, and leads the team with 7.5 rebounds per contest.  Edin Bracic is averaging 10.6 per contest, and leads the squad with 17 three pointers and 14 blocked shots.
Players To Watch (LC):  Andrew Utate has scored over 100 points for Lehman and is averaging 16.1 per contest thus far.  He also leads the team with 5.7 rebounds per game.  Damian Bellamy is next in line with 13.1 points per games and is adding 5.1 caroms per as well.  John Brens paces the Lightning with 6.7 assists per game and 14 steals, while Mylo Mitchell has canned 15 three-pointers, a team high.
News & Notes: CSI owns a comfy 49-14 all-time advantage over Lehman and are 19-9 all-time against them at the Apex, but the series has been a good one in recent years, with the teams having split the last six meetings.  Lehman has won two of the last three played in the Bronx, including last year’s meeting, 99-88.  The 99 total points allowed by the Dolphins that night was the highest the team allowed all season.  Offense is the key for the Lightning.  They are averaging 90.3 points per game in their four wins, and just 71.3 in their three losses.  The Dolphins have been similar conversely with team defense.  They are allowing 89.8 points in four losses, but have shut down opponents to the tune of 58.3 points per game in their four wins.  We will see how those averages play out tonight.  Senior Frank Schettino is working his way up the all-time scoring list at CSI and could climb further tonight.  He sits 23rd all-time and is just three points behind Willie Torres (1987-90) and 9 points behind former Dolphin Brian Gasper (1994-98).  On Tuesday he also tied former Dolphin Craig Sleap for 6th all-time in career steals, and needs three more to crack the top five.  The Dolphins are enjoying a +5.3 rebound advantage per game and are ranked 14th in the nation in total rebounds.  They also rank 33rd in steals.  Lehman ranks in the NCAA Division III Top 20 in both assists per game (19.0) and three-point shooting percentage (41%).