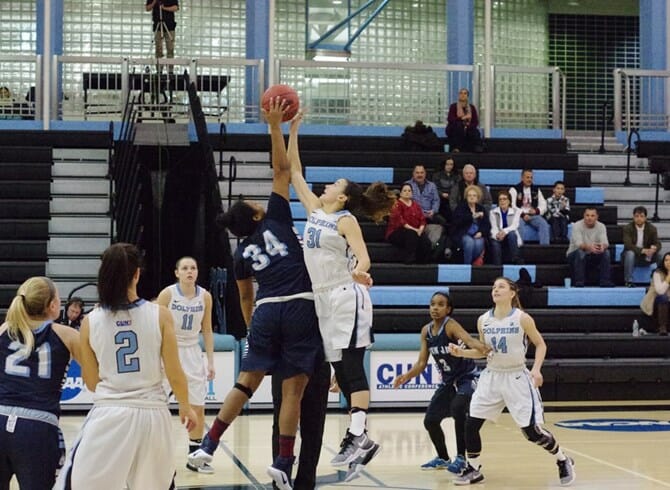 The College of Staten Island women’s basketball team will enter a 10-day rest window with a five-game win streak, scoring a lop-sided, 76-56, win over Keystone College in Pennsylvania earlier today.  The Dolphins improved to 7-2 overall, while the Giants fell to 3-5.

In the non-conference affair, the home Giants scored the game’s first bucket, but the Dolphins would respond with an 8-0 response, all by virtue of the foul line, to take a lead it would never relinquish.  Still, the Dolphins only led by a slim 18-16 margin with two minutes to play in the first quarter, when junior Samantha Flecker sank a three to start a 10-2 run to end the quarter, as Jacqueline Cali and Nihada Bracic also arced in three’s.

The run continued into the second, as Flecker added another three to give CSI a commanding 35-18 lead.  While the Giants continued to struggle from the field, another three, this time from Christina Pasaturo, gave CSI a 47-22 lead with four minutes to go till intermission, ultimately taking a similar 25-point lead into the locker-room.

Things went from bad to worse for Keystone in the third quarter, as the home team shot just 3-12 in the quarter with five turnovers as CSI continued to roll.  A Rosa Perone three-point play started an 11-2 spurt, giving CSI a dubious 70-31 advantage.  By the time the fourth quarter rolled in the Dolphins’ reserves got most of the minutes, and the Giants would outscore CSI, 19-6, in the final frame to make the score a bit closer than maybe the game would indicate.

Pasaturo would lead the way with 28 points, adding four rebounds.  Flecker finished with 19 points and three rebounds while Victoria Crea finalized with 11 points and five assists.  Dylae Williams led the Giants with 9 points and 9 rebounds.  CSI shot 45% from the field to Keystone’s 40% and finished a +9 in the turnover department, forcing 27 Giants turnovers.

The Dolphins will now be idle for the next 10 days, playing next against William Paterson University in Wayne, NJ, on December 21 at 6pm.