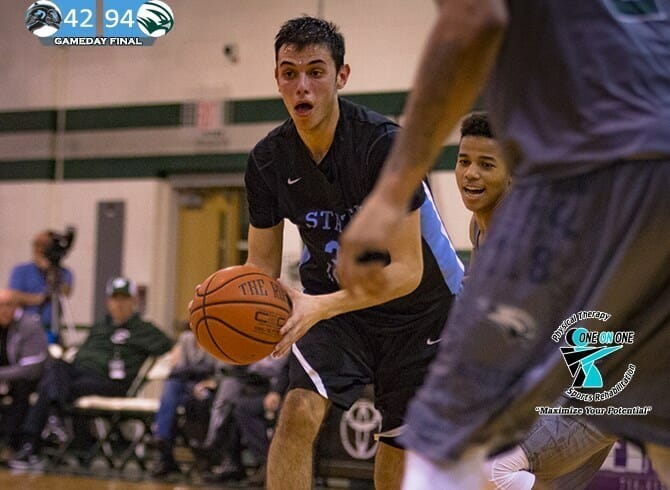 The College of Staten Island men’s basketball team saw their modest three-game win streak halted, falling hard to NCAA Division I Wagner College, 94-42, at the Spiro Sports Center on Staten Island.  The win for the Seahawks was their first home victory of the season and improved the team to 4-6 overall, while the Dolphins fell to 5-5.

The Dolphins got off to a solid start, staking a 5-2 lead on a game-opening three by Robert Rossiter and lay-in by Kevon Murphy just 2:22 into play.  From there, however, it was all Wagner, as the home team ripped off an 18-0 run, powered by two buckets each from JoJo Cooper and Elijah Davis, encompassing a total of seven minutes.

In the final 10 minutes of the opening stanza, CSI worked on clawing back into play but cold shooting and a powerful inside presence for Wagner gave the home team a 25-7 lead before Edin Bracic buried a pair of three’s and Khaleeq Baum completed a three-point play off an interior bucket to cut the lead to 30-18 with 7:37 to go.  The hot-shooting Seahawks, however, continued to hit their shots from behind the arc as Connor Ferrell and Devin Liggeons both converted long-balls to stake Wagner to a 39-23 lead with 3:40 remaining in the opening stanza.

The Dolphins needed a lift to start the second half, but Wagner ripped off a 7-0 run to start the frame before a Baum lay-up stopped the bleeding at 17:10.  The Seahawks did not take their foot off of the gas, legging out another 11-0 run three minutes later to seemingly put the game out of reach, 65-30, highlighted by a put-back dunk by AJ Sumbry, a three-point play by Liggeons, and another dunk by Greg Senat.

With the home school on cruise control, Wagner extended their lead heavily with both teams emptying the bench, ultimately nestling to a 94-42 final.

The win for Wagner improved their series lead to 13-3 over the Dolphins, and was the fifth-straight win for the Seahawks over the Dolphins dating back to 1989.  Wagner is 12-2 all-time against Dolphins on their home court.  The rivalry was renewed last year after a 16-year lay-off and is part of both schools’ 30,000 Degrees Initiative aimed at increasing numbers of local Islanders seeking college degrees by 30,000 in 2025.  The two teams are expecting to play during the 2017-18 season at the College of Staten Island.