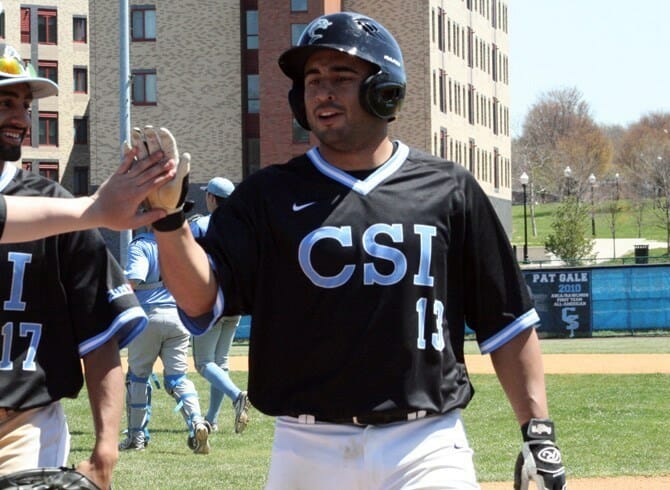 College of Staten Island senior George Kantzian capped a great week for the Dolphins a week ago by being named the CUNYAC’s Player of the Week, it was announced yesterday.  Kantzian, who hit a historic grand slam homerun in last year’s CUNYAC Championship at MCU Ballpark en route to being named the tournament’s Most Valuable Player, had a sensational cap to what was a 6-0 week for the Dolphins.

Kantzian hit safely in five of the six CSI wins last week, including the last four games, all against CUNYAC competition.  For the week, the senior catcher and first baseman batted .455, going 10-22 at the dish with a team-high seven RBI with five runs scored.  Kantzian also hit four doubles, bringing his season total of two-baggers to 17, two shy of the CSI single season record.  The onslaught included a 4-5 performance against the College of Mt. St. Vincent to start the week, where he hit two doubles for three RBI.  Kantzian was also perfect in the field in 41 chances and was walked a pair of times.  He boasted an on-base percentage of .520 and a slugging percentage of .636.

The Dolphins are on their longest win streak of the season at eight games, coming off of a 13-4 victory yesterday evening against Drew University.  They face off against Ramapo College in their next encounter on the road on Wednesday at 4pm.