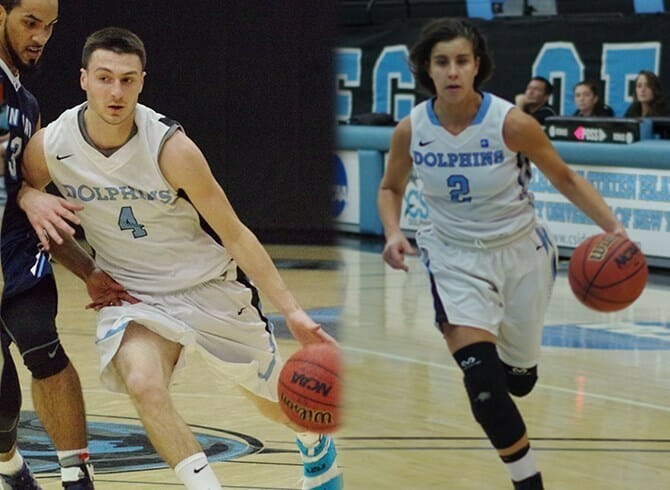 College of Staten Island backcourt pair Frank Schettino and Christina Pasaturo collected the highest marks from the City University of New York Athletic Conference this week, winning Player of the Week after a productive week on the basketball court for the Dolphins.  It was the first weekly honor of the season for each.

Schettino, a senior cutting into the record books, enjoyed a healthy pair of games that included another CSI record.  Owner of the school’s career and single season assists record, Schettino tied CSI’s single game assists record with 14 against CCNY a week ago, adding 16 points and seven rebounds in a lop-sided win over the Beavers, 83-64.  In time for Friday’s road tilt against Lehman College, Schettino jolted the Lightning for 27 points on 9-17 shooting, complete with 9 assists and five steals in an 84-71 win.

For the year the guard is tops on the team with 16.8 points, 28 steals and a total of 68 assists.  He sits tied for 19th all-time at the college in points with 1,259, and his 175 steals ranks third all-time.  The Dolphins are 5-4, riding a three-game win streak, and are now idle until the Tournament of Heroes which kicks off on December 29.

No stranger to conference laurels, two-time All-Star Pasaturo enjoyed a tremendous week for the Dolphins, one of the best of her distinguished career.  CSI went 3-0 on the week, and Pasaturo was at the center of it all, averaging 26.3 points and 7.0 rebounds per contest.  She also added 14 total assists, good for 4.7 per game.

The junior played wire-to-wire against CCNY and at Lehman College, scoring 27 and 24 respectively, shooting 40% from the arc and 70% from the line as well.  She saved her biggest game for Keystone College, scoring a season-high 28 points on 12-19 shooting, adding four rebounds.

For the season Pasaturo leads the team with 19.3 points per game, and is second in rebounds at 6.2 per outing.  She ranks 16th all-time in points scored at the college and 8th all-time in career assists.

The Dolphins will be idle until next week, when they travel to William Paterson University on December 21 at 6pm.