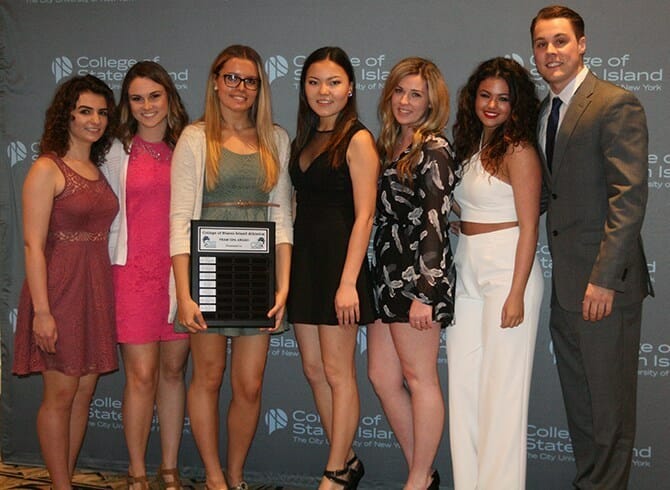 It has now become a familiar tradition, and one deservedly so, as the College Swimming and Diving Coaches Association of America has named the College of Staten Island women’s program to its list of Scholar All-America teams for the fall 2016 semester.  The Dolphins have earned the distinction for the past three semesters, and join a new record 638 teams spanning all NCAA Divisions and NAIA institutions to be named.

Last year’s winner of the Team GPA award at the CSI annual awards banquet, the women’s team currently sports a 3.38 GPA, making them one of  151 NCAA Division III women’s swim teams to accomplish the goal of casting a GPA of 3.00 or better during the fall semester.

According to the CSCAA, Part of the reason for the increase in award-winning teams is the overall growth of the sport.  The number of men’s and women’s institutions sponsoring swimming and diving is at a ten-year high.  The sport is also enjoying a bump in participation that has traditionally followed Olympic years.

CSCAA Executive Director Joel Shinofield feels much of the credit, however, goes to the coaches.  “Our coaches understand that the essence of intercollegiate athletics is the experience each student-athlete receives, and an emphasis on academics reflects what coaches feel is most important.”

The distinction comes on the heels of another high academic honor won by senior captain Naomi Gaggi, who last week was named the CUNYAC Scholar-Athlete of the Month for December.  CSI’s team GPA during the fall was better than the national average of Scholar All-America teams mentioned.  Massachusetts Institute of Technology led all NCAA Division III women’s teams with a GPA of 3.72.

– portions of this story courtesy of the CSCAA