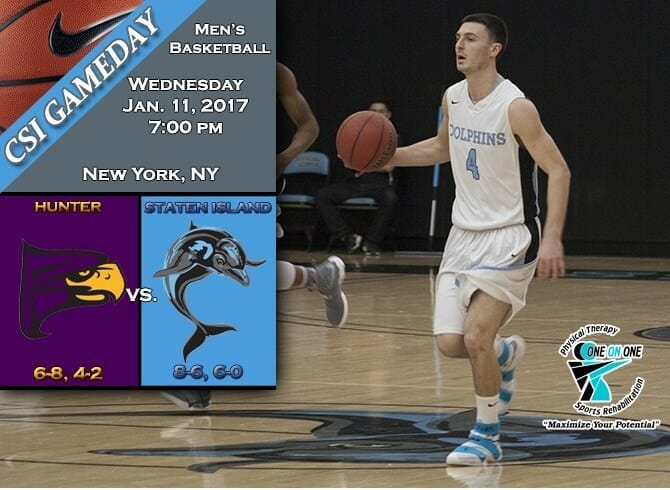 The College of Staten Island men’s basketball team is putting their unblemished CUNYAC record on the line tonight and on the road, as they tangle with the Hawks from Hunter College in their first of two meetings this season in Manhattan.  The Dolphins enter on a mini two-game win streak, improving their record to 6-0.  Hunter comes in at 4-2 in the CUNYAC, and with a golden opportunity to gain some ground in the standings.

CSI vs. HUNTER COLLEGE AT-A-GLANCE
Matchup: CSI (8-6 overall, 6-0 CUNYAC) vs. Hunter College (6-8 overall, 4-2 CUNYAC)
Where: Hunter Sportsplex – 695 Park Avenue, New York, NY
Tip-Off:  7:00 pm
Live Video:  http://www.huntercollegeathletics.com/watch/?Live=112
Live Statistics:  http://www.sidearmstats.com/hunter/mbball/
All-Time Series: CSI leads 48-24
Last Meeting: Jan. 20, 2016 – Hunter won, 82-81
Players To Watch (CSI): It’s been quite a couple of days for CSI senior guard Frank Schettino, who is coming off of a triple-double against Medgar Evers and has earned, CUNYAC, ECAC Metro NY/NJ, Met Basketball and US Basketball Writers Player of the Week honors.  He is averaging a NCAA Division III best 8.6 assists per game to go with his team-leading 16.1 points per contest.  Junior interior threat Kevon Murphy is on a hot tear, and is now averaging 13.4 points per game, coming off consecutive 20+ point performances.  He is second on the team in rebounds as well.  Look for Robert Rossiter to be an X-factor tonight.  He is averaging 7.8 points per game and leads the Dolphins by shooting 55% from beyond the arc.
Players To Watch (HC):  The Hawks have two players averaging in double figures this year, led by Amer Lukac’s 17.1 markers per.  He is also the team leader with 7.2 rebounds per clip while draining a team-high 23 three’s to lead the way.  Matt Franks is averaging 12.4 points per game and is red-hot from the free-throw line, shooting 92% this season (47-51).  Mamadou Sakho is an important bench player for the Hawks.  He is posting 6.6 points per game, but is third on the team with 4.9 rebounds per contest and is second on the squad with 22 three-point baskets, making him a threat from the exterior.
News & Notes: The Dolphins had won 12-straight in the all-time series before Hunter beat CSI last year in Staten Island, 82-81, on a buzzer-beating two-point basket by Brian Kruger.  The Dolphins have, however, won 10-straight games at Hunter dating all the way back to the 2000 season, and hold a 21-10 record at Hunter all-time.  Five out of the last eight games in the series have been decided by less than 10 points, so fans should expect to see another close one.  Both teams are surrendering 73 points per game this season and that is a good threshold for points.  The Dolphins are 8-1 this season when they allow under 73 points, while are 0-5 when they surrender more.  Hunter is 3-2 when allowing less than 73 and are 3-6 when they fail to do so.  With three more steals, Schettino will move into second all-time at the College with former Dolphin Dale Taranto with 191.  The record is 207 owned by Greg Whitehead who graduated in 1983.