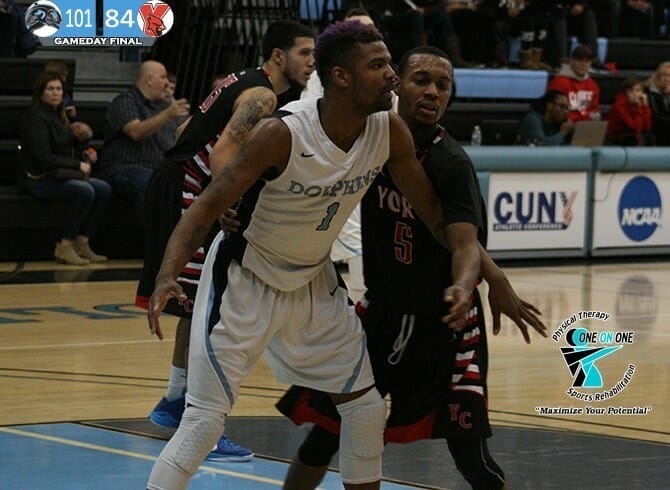 The College of Staten Island men’s basketball team used one of their finest shooting performances of the season, streaking past York College by a 101-84 score on Alumni Day at the Sports & Recreation Center.  The game came on the heels of the 7th Annual Matty White Alumni Game, and the win catapulted the Dolphins to a perfect 12-0 overall and their 9th-straight win on the season.  They are 15-6 overall while York fell to 2-18 overall and 2-10 in the CUNYAC.

Back-to-back three’s by Edin Bracic and Robert Rossiter got CSI started nicely, and out to a quick 10-4 edge before the visiting Cardinals punched back, taking a 15-14 lead on a Edwin Sainvil three seven minutes into the frame.  The teams then exchanged the lead three times before CSI unleashed a 15-4 run that spanned over four minutes, giving them a more buoyant 37-25 edge.  Frank Schettino accounted for 9 points in the run, ending it with a three-pointer.  Another three by Bracic would give CSI its biggest lead of the half, 44-29, before York settled in and knocked the deficit to 50-39 at the break.

To that point the Dolphins were shooting a robust 64% from the field, hitting four out of five from beyond the arc.

The Dolphins didn’t shoot the ball nearly as well in the second frame, but it did not matter, as CSI started the frame on a 12-6 spurt that afforded them a 62-45 edge.  Robert Rossiter nailed back-to-back buckets the second resulting a three-point play in the run.  Later in the frame, freebies by Kevon Murphy ballooned the lead to 68-47, and from there the Dolphins kept a comfortable arm’s length from the Cardinals.  Schettino flirted with another triple-double, coming two rebounds shy as he exited the game with about four minutes to play as the game seemed well in hand.

The Dolphins will put their CUNYAC unbeaten streak on the line, and will have a chance to lock in the No. 1 seed in the CUNYAC standings, when they face off against Medgar Evers College on Tuesday evening at the Sports & Recreation Center at 7:30pm.