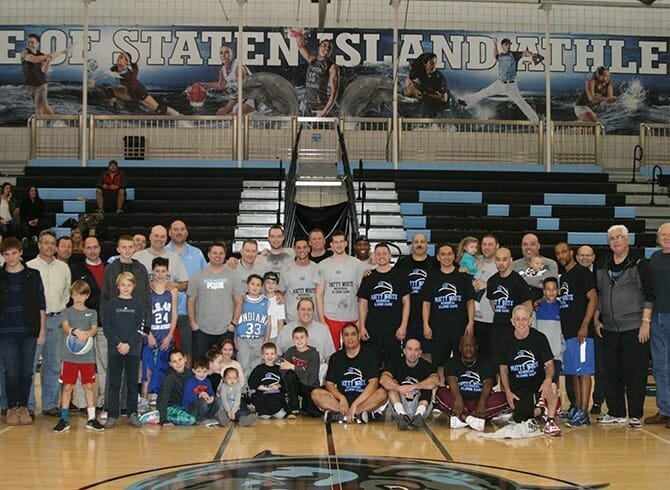 On a day where the College of Staten Island men’s basketball program honored the memory of late-assistant coach Matty White and his wife, Delores, almost 30 alumni of the program turned out for the 7th Annual Matty White Men’s Basketball Alumni Game.  The event not only serves as a chance for great alumni to get together and reminisce on great times, but a spirited basketball game followed, and four players posted in double figures to lift the gray team over the black team by a 93-86 count.

Team Grey never trailed in the game, at one point opening up a 24 point lead in the second half, before Team Black battled back.

Leading the way for the winners was both Brian Gasper, who traveled up from Florida, and recent grad Dale Taranto, who both posted identical 19-point, 6-rebound performances.  Michael Stewart canned 17 points  and tied with Joe O’Leary, Ken Thommasen and Dan O’Leary with a team-high 8 rebounds.  Frank Husslein added 10 points and three blocked shots.

More than anything, however, the entire group had a great time, celebrating the event with a rousing fully-catered luncheon after the contest, outfitted by Alumni Organizer Craig Sleap, who helped coach winning Team Grey.  Former Dolphins George Wonica and Jay Chazenoff guided Team Black on the sidelines, while Matty White, Jr., Sleap and Bill Felci helped coach Team Grey.

Associate Athletic Director David Pizzuto coordinates the event each year, and noted the success of the afternoon.  “These guys have a great time every year that we do this and its nice to bring them around each year to strengthen the relationship they have.”

CSI Head Coach Tony Petosa, whose team defeated York College after the Alumni game, 101-84, also recognizes the value of the day, and the overlying themes of remembering Coach White.

“The alumni have wanted to hold this game for many years and to have this game be in its seventh-year with Matty’s and Mrs. White’s names attached to it is very overwhelming.  He had such a profound effect on these guys and countless other alumni, so it’s great to remember him each year like this with everyone together.  Even the ones that never knew him know how much he means to our program and it’s come to mean a great deal to them”

A copy of the final boxscore can be found HERE.