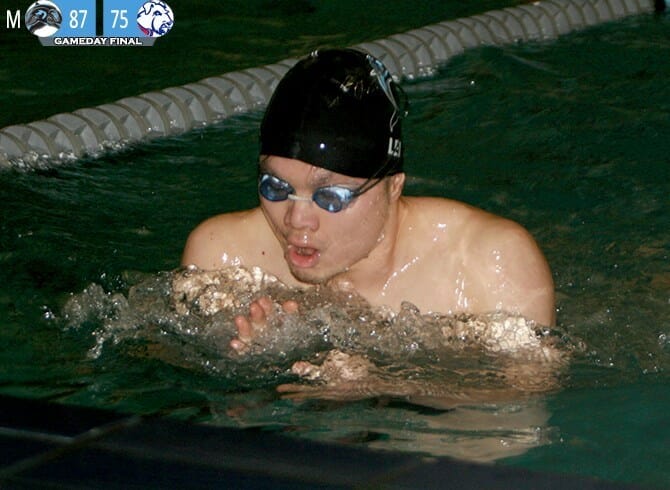 The College of Staten Island men’s swimming & diving squad took to their home pool for the final time this season.  Tonight they took on Division I opponents St. Francis College 87-75 and were able to successfully defend their pool from the invading Terriers to remain unbeaten at home this season.  The win boosted the men’s overall record to 7-2 overall while dropping the Terriers to 3-3 on the year.

The Dolphins fell behind early after falling in the opening 200 yard medley relay with a time of 1:50.31.  The team of Omar Zaky, Brandon Lei, Mike Munoz, and Jonathan Gorinshteyn kept it close but the Terriers were just too fast in the water.  The Dolphins were able to make up ground in the very next race when Derek Villa took first place in the 200 yard freestyle, touching the wall a one second before his opponent for a time of 1:51.14.

It was time for Tim Sweeney to put his talents on display against the Terriers and he did not disappoint.  Sweeney dove into the pool for the 50 freestyle and took first place with a time of 21.80 just .3 second slower than his current pool record.  Nick Defonte gave the Dolphins a much needed second place finish behind Sweeney with a time of 22.92.  After just missing a pool record Sweeney would indeed break one on the night and it came in the 100 yard butterfly with a time of 51.40, .32 seconds quicker than his previous best.
With the meet tied at 57 Gorinshteyn had a solid race in the 100 yard Breaststroke and finished in first with a time of 1:04.88 to give the Dolphins a lead heading into the final decide all race.

Up just 76-71 the team of Villa, Sweeney, Defonte, and Pinto took to the pool in the 200 yard freestyle relay with the meet on the line. CSI would hold a .4 second lead over their opponents after the first stretch of the relay and were able to extend that to as much as two and a half second.  Chris Pinto dove into the pool and made sure the Dolphins came away with the win with his fastest 50 yard freestyle time of the season.

The Dolphins will return to action on Thursday, January 26 where they will travel to take on CUNYAC opponents York College in their final meet before the start of the CUNYAC Championships.