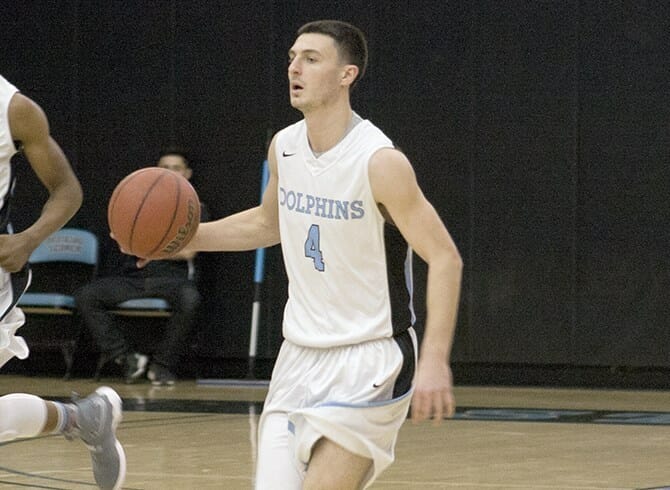 The College of Staten Island men’s basketball team stayed perfect in conference play tonight and produced their highest scoring output of the season to boot, storming past Medgar Evers by a 99-72 count in Brooklyn this evening.  The Dolphins lifted to 8-6 overall to go with their unblemished 6-0 CUNYAC mark, while the Cougars fell to 3-7, 2-3, respectively.  CSI senior Frank Schettino, who owns the single season and career assists record at the College, added the single game record tonight as well, blowing it away with 17 assists tonight, a new program best.

Junior Kevon Murphy came off of a career-best 28 point performance on Wednesday by scoring CSI’s first two baskets tonight, and from there, CSI got started, jumping out to a quick, 8-3, edge.  The host Cougars, however, had other plans, and a Joancarlo Bonilla jumper gave Medgar a 13-11 edge that started a 7-0 spurt.  By the end, The Cougars had an 18-11 lead with 13:27 to play in the first half.

CSI needed an answer and got a response from Murphy, who converted a three-point play that started an 8-0 run and got CSI back the lead at 10:45 on what would be a Khaleeq Baum three-point play. The run also featured great feeds from Schettino, who dazzled with play-creation that would ultimately score him the record. The teams pawed back and forth but a big 10-2 run by CSI, highlighted by four Schettino points and a three from Vincent Dacunto gave the visitors some breathing room, up 32-24.  CSI wasn’t done there, as a three by Edin Bracic gave the Dolphins their first double-digit lead at 38-27, and the Dolphins continued their up tempo play to register a big, 54-40 lead at the break.  CSI shot 49% in the first stanza, out-rebounding MEC, 30-21, in the process.

The Dolphins then made the lead seem insurmountable in the early stages of the second half.  After trading a couple of baskets, CSI ripped off a 12-1 run.  Murphy again was the ringleader, scoring 9 of the run’s points, capping it with a three-point play to make it 70-45, and CSI seemed to ride the wave from there.

CSI was able to extend by as many as 34 points on a pair of occasions thanks to Baum buckets, but the Cougars would finish the game on an 8-1 run over the final four minutes to make the final appear to be a bit closer than what it may have been.

Murphy led all with 25 points to go with eight rebounds in just 28 minutes of play.  Baum was next in line with 21 markers to go with a team high 14 rebounds.  Schettino, however, was the focal point registering the triple-double with 18 points, 12 rebounds and the record 17 assists.  Edin Bracic added 14 for the Dolphins.  MEC was led by Maurice Swaby’s 21 points while Timothy Bush added a team-high 10 boards.  CSI out-rebounded MEC 55-38, and shot 47% to MEC’s 34% in the game.

Up next for the Dolphins will be another conference test.  The team will put their unblemished record on the line at Hunter College on Wednesday, January 11, at 7pm.