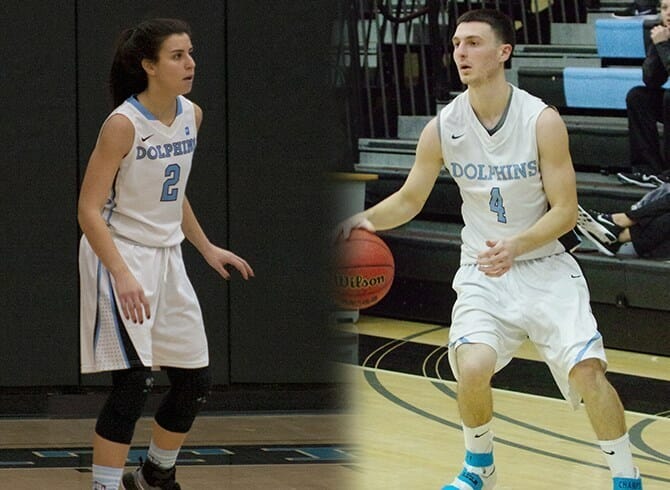 For the third time overall and for the second straight week, College of Staten Island basketball pair Frank Schettino and Christina Pasaturo took respective Player of the Week honors from the City University of New York Athletic Conference.  Both enjoyed great weeks as the Dolphins sit in first place in the standings.

Schettino, the NCAA Division III leader in total assists and in assists per game, went right back to work last week, leading CSI to a 2-0 week against CUNYAC foes.  First against Hunter College, Schettino missed his second-straight triple double by a hair, spreading out 23 points, 10 assists, and 9 rebounds in a 95-87 win.  Schettino also added a pair of steals in the victory.  Three days later against defending-Champion Brooklyn College Schettino net 17 points and added a whopping 15 assists, the second-highest single game total in history, adding six rebounds and another pair of steals.

For the season, Schettino leads all with 151 total assists and leads the Dolphins with 16.3 points per game.  He became the first Dolphin in school history to post three 150+ assist seasons, and he already owns the career and single season assist records.  He is 17 rebounds shy of 500, which will make him the only Dolphin in school history to record 1,000+ points, 500 rebounds, and 500 assists.

The CSI women went 3-0 last week, adding a win over St. Joseph’s College (LI) to a CUNYAC pair over Hunter and Brooklyn, and Pasaturo was the main cog in the winning wheel.  The junior has now tallied 20+ points in a game on 11 straight occasions, punctuated by a 30-point barrage against previously unbeaten Brooklyn in a game where she nailed six of 9 three-pointers.  That raises her season total to 21.6 points per game complete with 6.5 rebounds per game and team highs of 70 assists and 49 steals.

Pasaturo currently leads the nation with 58 three-pointers on a balmy 42% shooting from downtown.  The mark is the 12th-highest in CSI single season history.

Both Dolphins teams are back at it tonight, traveling to John Jay College for a CUNYAC doubleheader beginning at 6pm with the women’s tip-off.