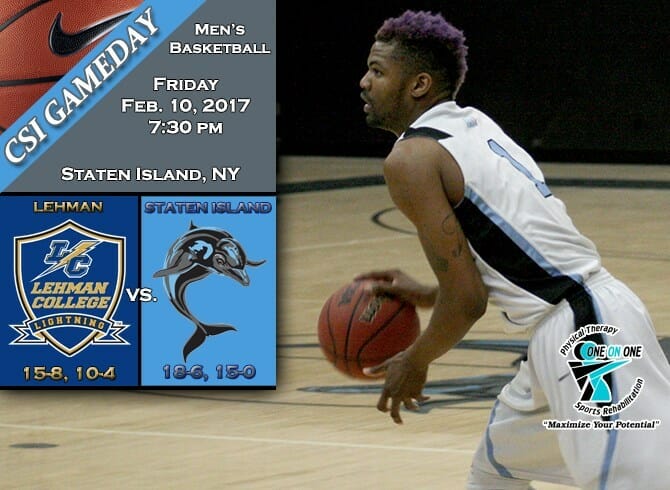 The College of Staten Island men’s basketball team is holding a 12-game win streak and an undefeated CUNYAC record coming into this evening’s doubleheader against Lehman College, and will look to keep it rolling tonight in their regular season finale.  Prior to tip the Dolphins will honor seniors Khaleeq Baum, Vincent Dacunto, and Frank Schettino.

CSI vs LEHMAN COLLEGE AT-A-GLANCE
Matchup: CSI (18-6 overall, 15-0 CUNYAC) vs. Lehman College (15-8 Overall, 10-4 CUNYAC)
Where: CSI Sports & Recreation Center – 2800 Victory Blvd. – Staten Island, NY
Tip-Off:  7:30 pm
Ticket Info:  $5 General Admission / FREE – CSI Students, Faculty, Staff
Live Stats: http://www.sidearmstats.com/csi/mbball/
Live Video:  http://www.csidolphins.com/csisportsnet
All-Time Series: CSI leads 49-14
Last Meeting: December 9, 2016– CSI won 84-71
Players To Watch (CSI): Frank Schettino notched his third triple-double of the season on Tuesday, with 14 points, 14 assists, and 10 rebounds against Brooklyn College. No other NCAA Division III player has more than one.  Schettino leads the team in points and assists this season.  Kevon Murphy paced the way for the Dolphins with game-high 27 points on Tuesday and he is averaging 13.8 points per game, good enough for second on the team. Khaleeq Baum is third on the team averaging 13.4 points per game and first with 7.6 rebounds per game.
Players To Watch (LC): Damian Bellamy leads the Lightening with 13.8 points per game and solid 8 rebounds per game. Andrew Utate is second on the team with 13.4 points per game and 5.2 rebounds per game. Mylo Mitchell is first with 3.2 assists per game and third with 11 points per game.
News & Notes: This is the second meeting this season between the Dolphins and the Lightning.  Staten Island trailed by double digits for the majority of the first half, but was able to chip away at the Lightning lead to come out with a win. Schettino led the way with 27 points and 9 assists, while Kevon Murphy notched his first double-double of the season with 14 points and 10 rebounds. Lehman is coming off of a dominant win over Medgar Evers, and they will look to extend their seven game win streak. Staten Island will need to crack down on defense tonight as Lehman averages 80.3 points per game, while the Dolphins allow 72.6 points per game.  Senior Frank Schettino broke the school’s career steals record on Tuesday with six thefts and is six assists away from beaking his own single season assists record.