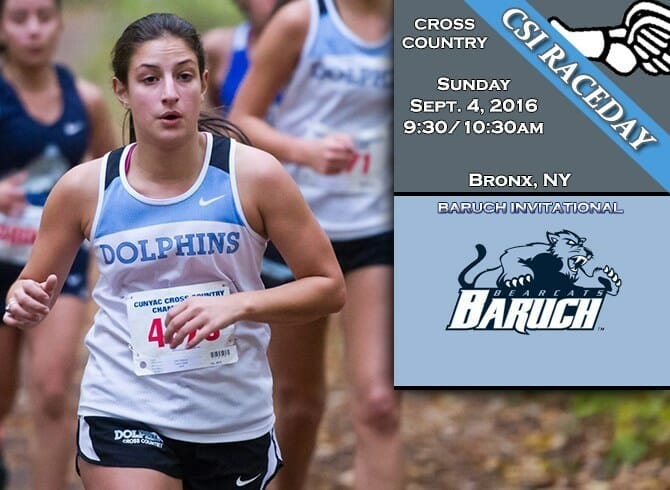 The College of Staten Island men’s and women’s cross-country squads officially usher their seasons in this morning, taking part in the Baruch College Invitational at Van Cortlandt Park.  The threats of poor weather have subsided a bit, so optimism is on high for today’s racing event.

CSI @ BARUCH COLLEGE INVITATIONAL AT-A-GLANCE
Meet Details:  Women 6K / Men 8K
Where:  Van Cortlandt Park, Broadway and Van Cortlandt Park South, Bronx, NY
Race Time: Women: 9:30am / Men: 10:30am
Last Year’s Result:  Women: 7th / Men: 2nd
Players To Watch (Women):  Senior Rebecca Vidal is one of only two returners to the CSI roster, which features a new look squad boasting numbers and a rigor for improvement.  Look for Valerie Mondiello and Brianna Benjamin to figure into the top times for CSI this morning.  Newcomer Tristiana Adragna will not be available today, as she doubles on the Women’s Tennis team and will miss this morning’s meet in order to be on the courts.
Players To Watch (Men):  The Dolphins will field an incomplete team this morning, using the race as an extention to their pre-season.  Still, returners Andrew Scharf, Liam McMunn, and Kenneth Morella all figure to be near the top of the race that CSI won outright a year ago.