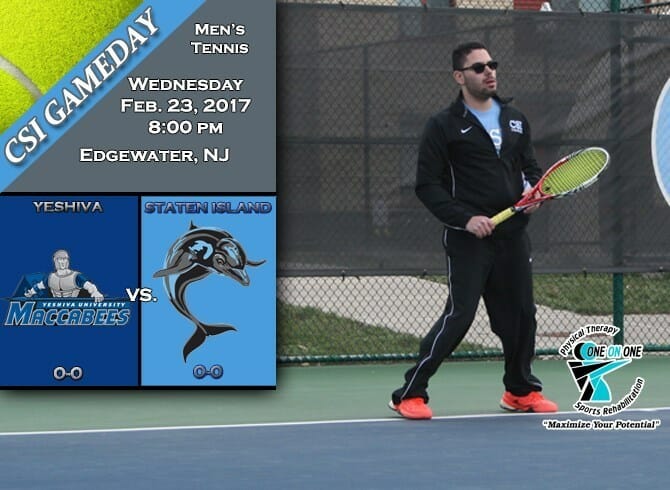 The College of Staten Island men’s tennis squad is looking to start their 2017 season on with a win tonight over the Maccabees of Yeshiva University.  Tonight’s match will take place at a neutral court in Edgewater, NJ starting at 8:00 pm.

CSI vs. YESHIVA UNIVERSITY AT-A-GLANCE
Matchup:  CSI (0-0 overall, 0-0 CUNYAC) vs. Yeshiva University (0-0 Overall, 0-0 Skyline)
Where:  CSI Tennis Center – 2800 Victory Boulevard, Staten Island, NY
First Serve: 5:00 pm
Players to Watch (CSI):  The Dolphins will be led by senior Chris Pinto tonight.  Pinto alternated between court one and court two last season and will look to help lift his team over his opponents tonight.  Andrew Adia had a solid season last year, and finished 6-5 overall with a 4-1 record from the two slot.  Staten Island has had many additions since last season and bolster a hearty 14-man squad and will use their numbers to take down their opponents.
Players to Watch (YU): David Papis Elon will be the senior leading the charge tonight.  Elon finished last season 12-2 overall with all of matches being played in the number one slot. Fellow senior Daron Greenblatt will lend support after posting a 6-1 record just a season ago.
News and Notes: Tonight’s match will be the first meeting between these two squads who are both looking to pick up their first win of the season in their opening match. Yeshiva University is coming off of a 13-4 season and will look to have the same success while the Dolphins will look to improve their 6-9 mark from last season.