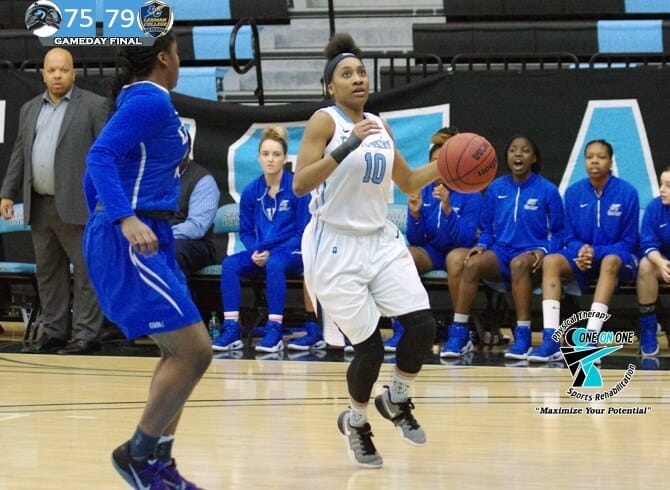 The College of Staten Island women’s basketball team concluded their regular season tonight with a 79-76 loss to Lehman College at the CSI Sports & Recreation Center.  The loss marks the second in a row for the women, which is their longest losing skid of the season right before the start of the CUNYAC Postseason Tournament.  The Dolphins finish the regular season 19-6 overall and 13-3 in the CUNYAC, which gives them the three seed heading into the postseason.

For the Dolphins it was the tandem of Samantha Flecker and Christina Pasaturo who each tallied a double-double in tonight’s loss.  Flecker was cold early in the game but found her groove to finish the game with 23 points and 11 rebounds while Pasaturo added 20 points and 12 rebounds. Angelique Price returned to her early season form in tonight’s contest and was able to get to the rim whenever she chose and tallied 17 points and five assists.

The Lightning outshot the Dolphins 41% to 32% on their home court.  The Dolphins took 39 three-point shots tonight which tied their most in a game which last happened against Drew University.  Staten Island was more aggressive on the boards tonight and edged out the Lightning 55-49, however it was Lehman College that won the turnover battle 19-21.  Lehman found success inside the paint tonight as they outscored the Dolphins 44-28.

The Lightning found their way on the scoreboard immediately as Amely Del Rosario, the CUNYAC’s leading scorer, drove the lane to give the Lightning an early 2-0 lead. The Lightning would follow that up with five unanswered to open the game on a 7-0 run.  The Dolphins earned their first points of the game when Pasaturo converted a fast break layup which was assisted by Price.  The fast break was essential in tonight’s game as both teams like to play fast-paced basketball ball which led to the Dolphins scoring their first eight points on fast breaks.

The Lightning were able to keep the Dolphins at an arms distance away from them the whole first quarter as their offense was rolling and the Dolphins struggled to find their way from behind the arc as they ended the first quarter 0-for-10 from range.  Lehman would stay hot in the second quarter and go up 11 half way through the quarter. CSI would begin to find their footing as the quarter came to a close as they were able to shrink the 11-point deficit down to just five.  Pasaturo sank a pair of three’s while Victoria Crea would convert a pair of free throws with .4 seconds left on the clock before the half.

Lehman’s big advantage tonight was their height, despite losing the rebound battle, they were able to score 24 points in the paint in the first half.  Krystal Pearson and Marika Gordon were able to use their size all game and when they weren’t using their post moves for easy layups they were dishing the ball to one another for an easy lay in.

Midway through the third quarter the Dolphins hit a streak and went on a 6-0 run which brought them within two of the Lightning.  The Lightning however, would answer that 6-0 run with an 11-0 run of their own to keep the surging Dolphins at bay. With just five seconds left in the quarter Price had a clutch corner three to bring the Dolphins within three of the Lightning headed into the fourth quarter.  Flecker would start the quarter off with a three-point basket to give the game its first tie. CSI had their chance to take their first lead of the game after a Pearson turnover but the Dolphins were unable to convert their opportunity as Jacquelyn Cali’s three-point shot rimmed out.

With the game tied, the Lightning would go on a 5-0 run before a pair of free throws by Crea and a jumper by Price made it a one-point contest. With just 1:24 remaining in the game the Dolphins trailed by three points.  Pasaturo would convert a pair of free throws to bring the game within one point in the final seconds.  The Dolphins would catch a break as Del Rosario would turn the ball over which led to a Pasaturo fast break but she was unable to convert the layup to give the Dolphins the lead late in the game.  Pearson would sink both of her attempts from the charity stripe to put the Lighting up three with just 21 seconds remaining.  The Dolphins would have their opportunities to tie the game up, however, their shots would fall short to give Lehman the win.

Pasaturo’s 20 points extend her streak of 20-plus point games to 20 consecutive games as well as put her over the 1,500 career point mark.

The Dolphins will now host a CUNYAC second round game on Saturday, February 18 and take on the six seed.