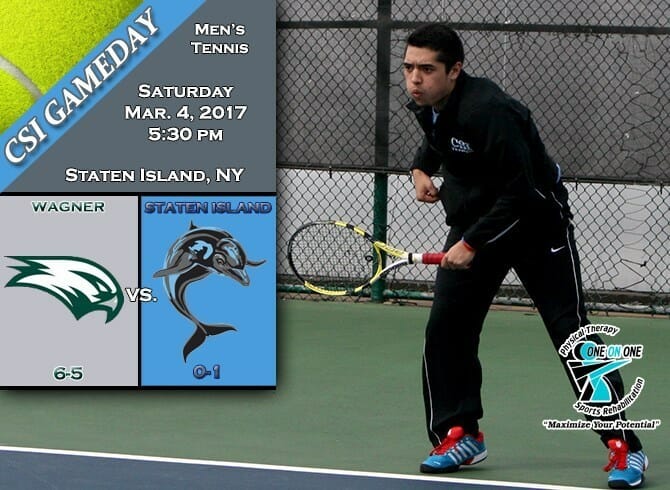 The College of Staten Island men’s tennis squad got their season underway last week, and now will get ready for their home indoor opener when they host Wagner College as part of match play this evening at 5:30pm.  The Seahawks come in well-seasoned, having played 11 matches between the fall and spring semesters.  The match this evening will be played indoors at the CSI Tennis Center.

CSI vs. WAGNER COLLEGE AT-A-GLANCE
Matchup:  CSI (0-1 overall, 0-0 CUNYAC) vs. Wagner College (6-5 Overall, 1-0 NEC)
Where:  CSI Tennis Center – 2800 Victory Boulevard, Staten Island, NY
First Serve: 5:30 pm
Players to Watch (CSI):  In their opener, the Dolphins went with sophomore Andrew Adia in the top spot, followed by sophomore Matthew Vesci at No. 2.  Expect the Dolphins to show different lineups throughout the season as they fine tune their very young squad throughout the year.  Raymond Hwang enjoyed a solid 2015 campaign for CSI but was sidelined all of 2016 and is back this season, so look for him to be an integral part of the middle of the order for CSI this season.  Alex Tsui was the only Dolphins’ player to register a set win in CSI’s hard loss to Yeshiva in their opener at the No. 6 spot.
Players to Watch (WC): Dale Sandy has had a nice start to the season as he is a perfect 2-0 in the top spot and 3-5 at the No. 2 position.  Charlton Boyd has earned the best record with a 10-5 overall mark that includes a 5-2 mark at the No. 6 position.  Sandy and teammate Anatoliy Lashkul have been terrific in the top doubles spot, sporting a 7-2 record in that space and an 11-7 record overall as a duo.
News and Notes: Tonight’s match is the first in recent memory between the two sides.  This is CSI’s home opener, while Wagner is a combined 2-5 on the road this season, as opposed to a 4-0 home court record.  Of their 11 matches played thus far, Wagner played four during the fall semesters and were also a part of three other fall invitationals.  During the spring semester so far, Wagner is 2-4.  Tonight match play will follow NCAA Division III rules, whereby doubles play flights count individually and as three total points that can be earned.