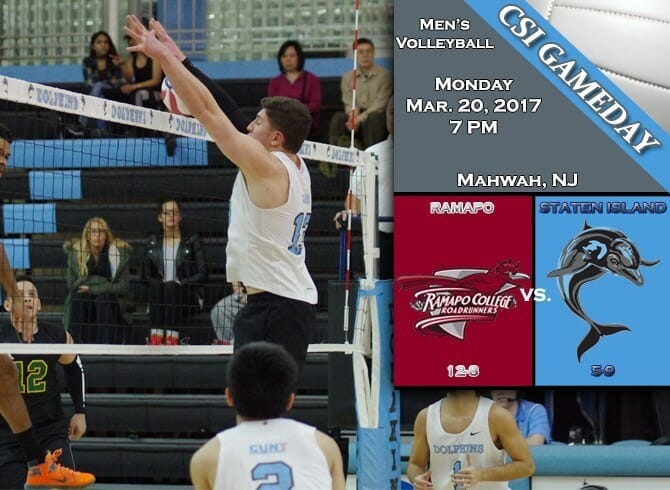 The men’s volleyball team will head to Mahwah, NJ tonight to take on non-conference opponents, Ramapo College at 7:00 pm.  The Dolphins will go into tonight’s match coming off of a 3-0 sweep against Medgar Evers College, while the Roadrunners will look to increase their home winning streak to three in a row.

CSI vs RAMAPO COLLEGE AT-A-GLANCE
Matchup: CSI (5-9 Overall, 2-4 CUNYAC) vs. Medgar Evers College (12-8 overall, 2-0 Skyline)
Where: Bradley Center – 505 Ramapo Valley Rd – Mahwah, NJ
First serve: 7:00 pm
All-Time Series:  Ramapo leads 1-0
Live Video: http://www.ramapoathletics.com/watch/?Live=161
Live Stats:  http://www.sidearmstats.com/ramapo/mvball/
Players To Watch (CSI):  Mark Palencia has been a standout this season, pacing the way with 118 kills which is twice as more as his closest teammate.  Palencia’s .175 hitting percentage is also the highest on the squad.  Danil Kukovitskiy and Khaleeq Baum are on blocking duties as they have a combined 30 blocks, with Kukovitskiy collecting 27 of them. Baum joined the team late this season but has already began to make an impact on the offense as he is second on the squad, hitting 1.50 while tallying 18 kills in just four matches.  Brandon Lei will set the ball for the Dolphins against the Roadrunners tonight.  Lei places second on the squad with 24 assists and will look to deceive the Roadrunners with shifty passing to allow his teammates free shots.
Players To Watch (RC):  Justin Feigeles and Connor Brandow have been an attacking nightmare for opposing teams this season.  Feigeles leads the charge with 213 kills while Brandow follos with 118 in 18 matches. The Roadrunners rely on a pair of setters in Garrett Fitzsimmons and Mikhael Erushalimski to get the team’s offense moving in the right direction.  Erushalimski leads the pair with 343 assists this season, playing in just 11 matches.  Jordan Elam is also a force to be reckoned with at the net as he leads the team with 53 on the year, followed closely by Nick Amos with 43.
News & Notes: Both teams are coming off of wins into tonight’s match. The Roadrunners, winners of two-straight at home, will want to protect their home court while the Dolphins will look to invade and tarnish Ramapo’s streak. Ramapo is 8-4 at home this season while the Dolphins are 4-6 on the road.  CSI has played better on the road this season as four of their five wins have come from away games. All but two matches this season have been determined in three sets for the Dolphins while the Roadrunners have had multiple matches venture past the three set mark. In the last meeting between these two teams on January 25, 2015, the Roadrunners swept the Dolphins 3-0 at home.