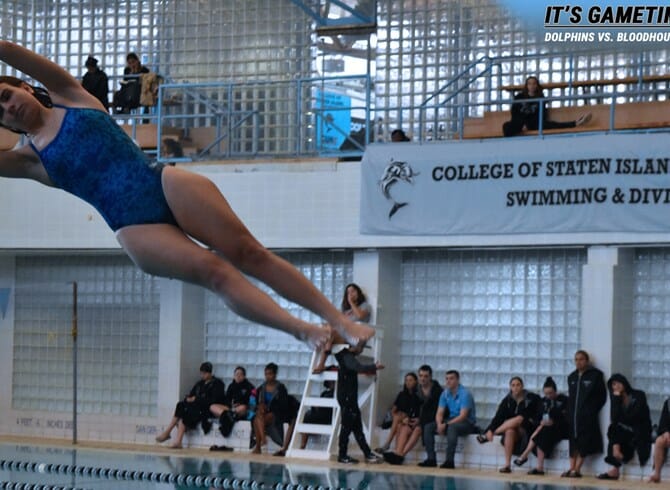 The College of Staten Island swimming & diving team returns to CUNYAC action tonight when they host John Jay College at the Sports & Recreation Center in Staten Island, NY. The Dolphins will look to build on their momentum and pick up another win as they season beings to draw to a close.

CSI vs JOHN JAY COLLEGE
Matchup: Women (2-7, 2-2 CUNYAC)  vs. John Jay College Women (3-4, 2-2 CUNYAC)
Where: Sports & Recreation Center, 2800 Victory Boulevard, Staten Island, NY
All-Time Series: CSI leads 13-4
Last Meeting: October 31, 2016 – CSI won 146-49
Players to Watch (CSI): Pacing the Dolphins with 245.5 points this season is Ewa Wojciechowska. Wojciechowska powers through the water and has 19 first-place finishes this year. Victoria Crea is second on the team with 8 first-place finishes. Look for Crea to make an impact in the 50-yard freestyle as that is her signature event. Alicia Defonte has 16 top three finishes this year, with five of those finishes coming in first place. Jessica Shaw and Alyssa Dunn will dominate the diving boards as they have for much of the season.
Players to Watch (JJC): Bokey Wong is coming off of a first-place finish in the 200-yard IM against St. Joseph’s College. Lexi Achtyl also beat her opponent to the wall in the 100-yard fly with a time of 1:13.48 and will look to replicate that tonight.
News & Notes: The Bloodhounds have won just one of the last four outings with the win coming against CUNYAC opponents, York College. The Dolphins have won the last five meetings against the Bloodhounds and in the last two meetings at Staten Island, CSI has averaged 140.5 points while the Bloodhounds have averaged 56.5. Three of John Jay’s four wins have come at the Sports & Recreation Center, with their last one coming back in 2011.