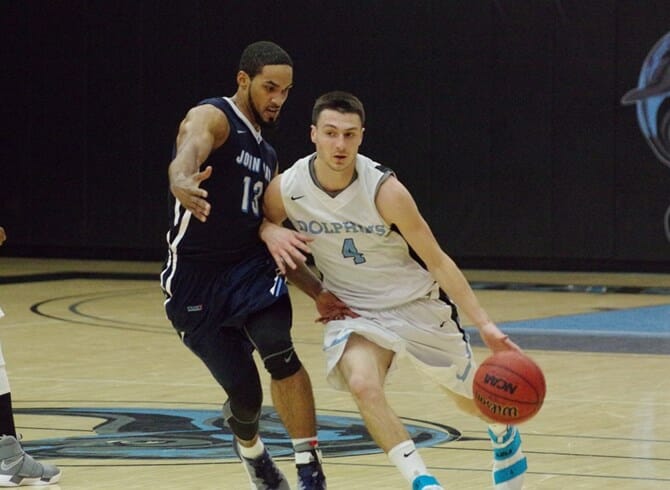 College of Staten Island men’s basketball senior Frank Schettino enjoyed a stellar final season, and the positive hits keep on coming, as Schettino has earned a first-team All-Atlantic District All-Star citation from the National Association of Basketball Coaches.  The honor puts Schettino in the running for an All-America honor to be doled out by the organization tomorrow afternoon.

On the heels of CUNYAC and ECAC Metro Player of the Year honors, Schettino is coming off of a super season that saw the Dolphins run a perfect campaign through the CUNYAC schedule en route to a tournament championship and a first-round entry to the NCAA National Championship Tournament.  Schettino was the team’s leader in points at 18.0 per game and total assists with 258, a new school record and good for tops in the country.  Schettino was also the nation’s leader in free-throws attempted and triple-doubles, finishing second on the team with 7.2 rebounds per contest.

“It is incredible to be honored on the first team from the NABC,” said Schettino.  “To be considered for an All-American as well is something I am looking forward to.”

Schettino captured a host of tremendous individual performances this season, including a 43-point effort against City College of New York during the regular season that tied his own single game record.  After tying the school-record for assists in a game, Schettino decimated that record with a 17-assist game against Medgar Evers College during midseason.  Although the Dolphins exited the NCAA Division III National Championship Tournament after a single game, Schettino led the way in that contest with 20 points against Swarthmore College.

Schettino will have one more collegiate basketball game in store, when he travels to Salem, VA, to take part of the NABC Division III All-Star Game, where he will take the floor with several other All-District and All-America NABC honorees.