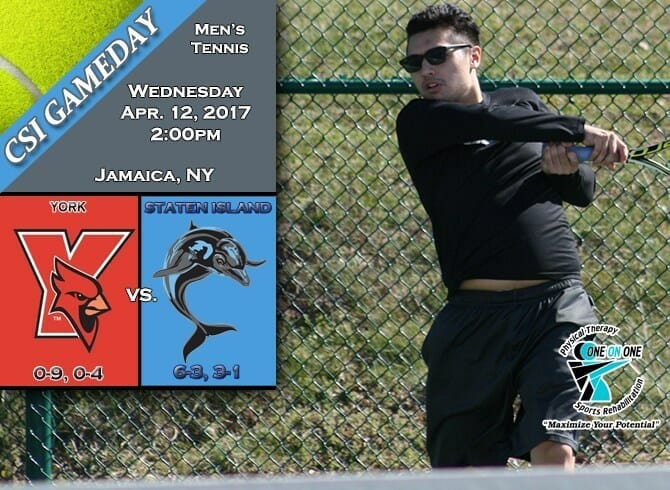 Fresh off of their fifth-straight win the College of Staten Island men’s tennis unit will try to keep the ball rolling, as they travel to Jamaica, NY, to take on CUNYAC-rivals York College.  The Dolphins are sporting a 3-1 CUNYAC record and are looking to keep pace near the top of the table in the standings.

CSI vs YORK COLLEGE AT-A-GLANCE
Matchup: CSI (6-3 Overall, 3-1 CUNYAC) vs. York College (0-9, 0-4 CUNYAC)
Where: York College Tennis Courts – 94-20 Guy R. Brewer Boulevard, Jamaica, NY
First Serve: 2:00pm
Players To Watch (CSI):  Several Dolphins stayed hot after wins yesterday at PSU-Abington, including Mukhiddin Nuriddinov who has now won six straight singles matches to improve to 6-2 overall.  Akaki Dundua and Alex Tsui are both winners of five-straight in singles play.  Dundua teamed with Tao Lin to score a very important win at No. 2 Doubles yesterday 8-7 (7-5).  Matthew Vesci played in the top-spot yesterday, while Andrew Adia played at No. 2 and got a big win.
Players To Watch (YC): Ralph Ramos and Abir Dupu have been consistent for York this season.  Dupu is a respectable 2-3 at No. 6 Singles while Ramps has posted the same record at No. 4 singles.  York is still looking for their first doubles win of the season.
News & Notes:  The Dolphins have now won five-straight including three-straight over CUNYAC opponents and they have been playing a lot of tennis of late as this is their fifth match in the last six days.  After this, they will be idle until Monday of next week.  York has had a tough go of it this season as they are 0-9 and are coming off back-to-back 9-0 losses to Baruch College on April 9 and Mt. St. Mary just yesterday.  Last year, CSI defeated York, 8-1 at CSI.