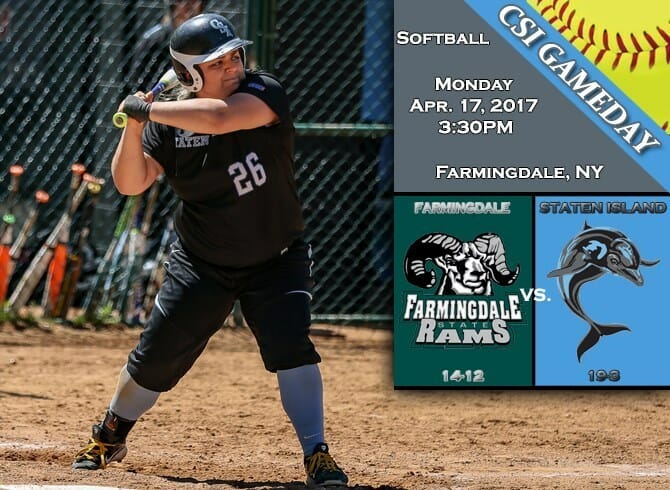 The College of Staten Island softball team will put their 15-game win streak on the line this afternoon when they travel to Farmingdale, NY to take on non-conference opponent, Farmingdale State College.  The Dolphins currently sit one win away from tying the CSI win streak record which was set in 1990.

CSI vs FARMINGDALE STATE AT-A-GLANCE
Matchup: CSI (19-3 overall 8-0 CUNYAC) vs. Farmingdale State (14-12overall, 4-2 Skyline)
Where: Farmingdale State Softball Field -2350 Broadhollow Rd, Farmingdale, NY
First Pitch: 3:30 pm
All-Time Series:  CSI leads 9-8
Players To Watch (CSI):  Jacqueline Cautela continues to lead the nation with a 0.12 ERA and a 9-0 record this season. She also helps her own cause at the plate as she sits second on the squad with a .429 batting average. Patricia Riches has been a power house at the plate in her rookie campaign and boasts a .582 batting average which puts her third in the nation.  Nicolette Trapani has been solid for the Dolphins at first base this season when she’s not in the circle and has 79 put outs.
Players To Watch (FSC): Sierra Cardenales leads the Rams with a .368 batting average and has collected 12 RBIs with only eight strikeouts. Sitting in second with a .365 average, Lori Michalowski paces the way with 17 RBIs and is hard for opponents to strikeout as she has tallied just four throughout the season. In the circle, Julia Walpole has appeared eight times with a record of 4-2 and boasts a 3.82 ERA.
News & Notes: The Dolphins lead this series 9-8 but since 2010 it has been all about the Rams.  Farmingdale State is 7-3 against the Dolphins since 2010 after the Dolphins opened the series back in 2000, 6-1. Last year Staten Island took game one 13-3 before the Rams rallied back in game two to win 9-6 to prevent the sweep.  This year the Dolphins bring a stacked team with national power in the circle and on the plate and will want to pick up a pair of wins this afternoon to keep their win streak alive and set the CSI school record.