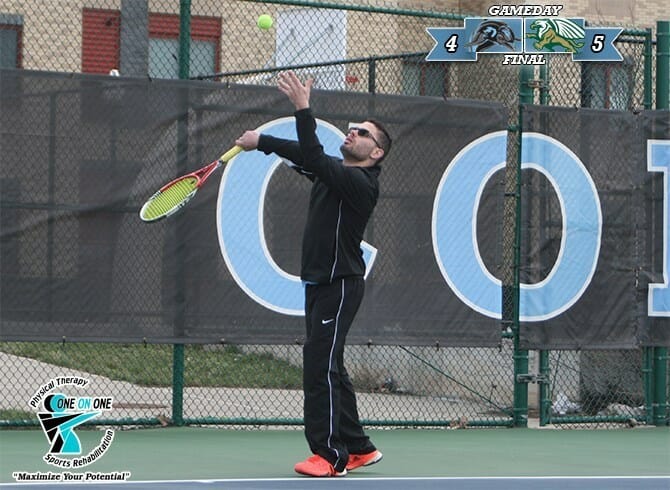 The College of Staten Island men’s tennis team was locked in a heated four hour battle tonight against Sarah Lawrence College in Bronxville, NY.  The Dolphins fought hard but were unable to surpass the Gryphons as they would fall 4-5 and drop to 3-5 overall.  The Gryphons would win their second in a row and improve to 2-4 overall.
The Dolphins took an early 2-1 lead over Sarah Lawrence in doubles with Chris Pinto and Mitchel Voloshin teaming up on court one.  Pinto and Voloshin would be the final doubles match out of the three and would go on to with a close match 9-8 (8-6).

When play switched over to singles play became very competitive.  James Berry defeated Aldo Rodriguez to tie the match up 2-2 after the Dolphins had an early lead.  Andre Garibaldi would then take down Brandon Nickel to give the Gryphons a 3-2 lead over the Dolphins.

A match that took two hours to decide went in favor of the Gryphons after Tony Gonzalez was unable to close out his lead early on which allowed Arnie Welles to rally back and take the final set 11-9 and put the Gryphons up two.
Staten Island was now one loss away from falling to Sarah Lawrence in the match however Andrew Adia kept the Dolphins afloat with a win on court two to put the Dolphins within one.  Pinto would tie it up at four after an outstanding match in the number one spot.

The match came down to court three which featured Mitchel Voloshin and Ian Gonzalez. It came down to a race to ten which saw Gonzalez take an early 4-1 lead over Voloshin.  Voloshin would battle back to tie it 4-4 but in the end would fall to Gonzalez and give the match to Sarah Lawrence.

The Dolphins return to action tomorrow Thursday, April 14 against St. Joseph’s College – LI at 4:00 pm at the CSI Tennis Bubble.