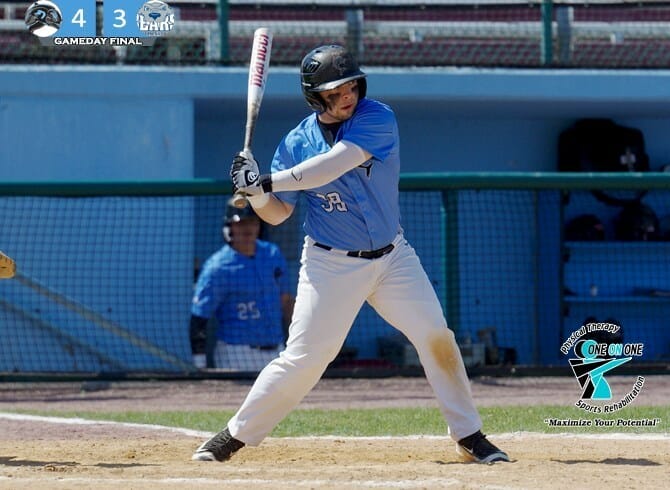 The College of Staten Island kept on rolling this afternoon with a 4-3 win over St. Joseph’s College – Brooklyn at the CSI Baseball Complex.  This afternoon’s win marks the third straight home victory for the Dolphins while also bolstering their win streak to 10 in a row.  The win improves the Dolphins mark to 20-7-1 while knocking the Bears down to 12-14 on the year.

The Bears brought out their bats early on Josh Bernstein to open the game and tallied three runs on four hits.  Kevin Linitz and Francis Rapp hit consecutive singles to put two on for St. Joseph’s – Brooklyn. John Condon would score Linitz from second with a hard hit single through the left side to put a run up on the board. With the bases loaded the Bears looked primed to add more to their total.  Adam Schwartz would make sure they did, as he launched the ball to left center for a two RBI double.

Down 3-0, the Dolphins were in a hole they did not want to be in to start the game. The Dolphins are 5-4 this season when they don’t score the first run.  Bernstein would settle down after that first inning and would allow just a pair of singles combine in the second and third.  The Bears would threaten but Bernstein would force the batters into grounding out to keep their deficit to just three.  Bernstein would throw six complete innings and allow 10 hits with three runs while tossing three strikeouts before giving way to Dan Newman.

The Dolphins finally got on the board in the bottom of the sixth.  Glenn Glennerster lined one right over the shortstop and into left center for an RBI single.  With Frank Muzzio on third and Glennerster on first, Josh Mercado would be walked to fill the bases with Bobby Drake due up to bat.  Drake nearly hit a grand slam as his hit would sail over the left fielders head and into the fence.  Drake would collect a two RBI double which tied the game up but Mercado tried to put the Dolphins ahead to no avail as he would be thrown out at the plate by the cut-off man.

Both teams struggled to get anything going after the sixth until the final inning of play.

In the top of the 9th the Bears loaded the bases with no outs after the call was made to intentionally walk Schwartz, who is batting .242 on the year.  The called turned out to be the perfect one as Anthony DiMarco would make a diving grab at third to get the force out at the plate.  The very next batter would fly out to right field to end the inning and prevent the Bears for scoring the go ahead run.

The bottom of 9th, everything seemed to be going in the Dolphins’ favor.  Jordan Wilson hit an infield single as he just beat the throw to first to lead off the inning.  Jett Nouvernte, the team’s leader in terms of batting average, came to the plate and struck out, giving the Dolphins their first out of the final inning.  With one out, Frank Sconzo would reach via a base on balls, giving way to DiMarco. DiMarco stepped to the plate with the lights solely on him and he knew his task.  Wilson, one of the fastest runners on the team, standing on second meant a single out of the infield most likely meant the game would end.  DiMarco waited for his pitch and grounded one right through the left side past and outstretched Francis Rapp and into the outfield and Wilson motored home for a walk off single.

The Dolphins will return to action tomorrow when they take on Baruch College at the CSI Baseball Complex as the away team.