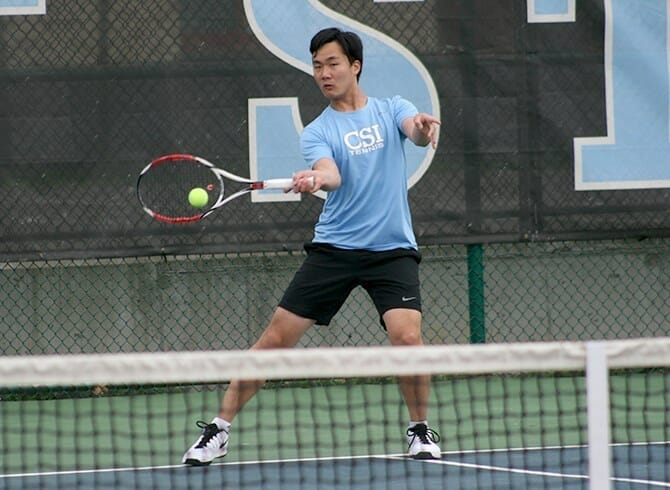 It what was their final tune-up before the CUNYAC Postseason, the College of Staten Island men’s tennis squad finished off on the right footing, posting a 6-3 win over Rutgers-Newark today at the CSI Tennis Complex.  The Dolphins improved to 9-5 overall with the win, while the Scarlet Raiders fell to 8-6.

CSI got off to a good start in doubles.  As the duo of Chris Pinto and Raymond Hwang were able to out-do the RU team of Parth Shah and Kevin Martin, 8-0.  Rutgers was able to answer in the top spot as Brandon Davis and Joe Codomo won an 8-4 decision but CSI would counter as the team of Akaki Dundua and Tao Lin worked quick in an 8-4 win over Richard Nguyen and Alan Yu in the No. 3 position.

With the regular season now completed, CSI will turn its attention to the CUNYAC Postseason.  The Dolphins have earned the No. 3 seed in the six team tournament, and will host No. 6 John Jay College on Friday, April 27, at 3pm at the CSI Tennis Center.