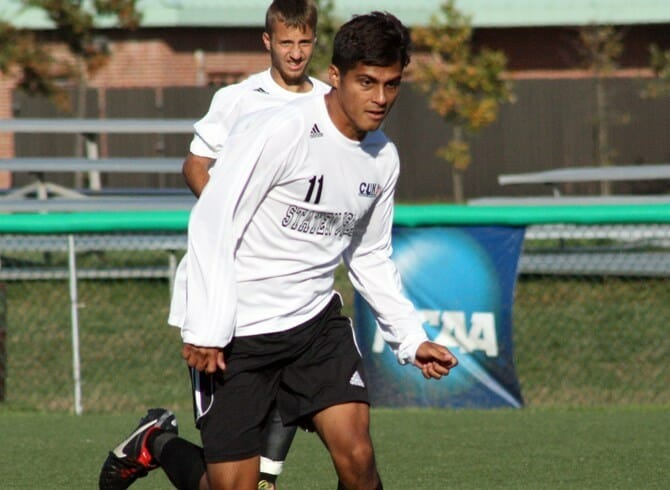 The College of Staten Island men’s soccer season is officially set for launch on Saturday, and in 2014, the team is chasing one thing: excellence.  After two consecutive fourth-place finishes and semifinal exits in postseason play, the Dolphins will be looking to crash the top of the standings this year, and will look to do so with a team heavy with youth for third-year Head Coach John Tardy.

“We have a really young group that plays together and are on board with what we are trying to do, which is get better with each game,” the skipper said.  Tardy joined the club just weeks before the 2012 season.  With his second full recruiting class in the fold this season, he hopes the sky will be the limit in 2014.  “The kids who make up our team are kids who want to be here, players who put the team first and all contribute something. It’s a really nice mix.”

The first signs of a transformation came midway through the season last year.  The Dolphins muddled through a 1-8-1 start, but rebounded nicely, winning eight of their final 11 games as one of the hottest teams in the CUNYAC.  The three losses all came by a single goal, the heaviest coming on the season’s final day, a 3-2 loss to eventual-champion Baruch College in the CUNYAC Semifinals.  The finish was just one of many silver linings.  The team amped up the offense to the tune of 42 goals last season, a marked improvement from previous years.  Alfonso Castaneda developed into a CUNYAC All-Star and goal scoring threat despite a lot of presence on the back line, and the team found a pair of anchors between the pipes in freshmen John Gioeli and Antonio Lynch.  They are just a portion of what the team brings back in 2014.

Castaneda especially will be looked at to center the unit this year.  The team’s lone senior, Tardy sees him as a potential Player of the Year candidate.  “He can do it all, and he is making it very hard for us not to play him at the front the season.  He has an excellent finish and is a true leader who will do whatever is asked to make the team better.  Whatever he does, he goes all-out to do it, and it’s contagious with his teammates.  You couldn’t ask for a better leader.”

The senior is one of four top-five scorers from a season ago who will rejoin the team.  Other scoring threats include sophomore Marcin Klim, junior Daniel Tsygankov, and sophomore Nicholas Bacarella.  Stabilizing the depth through the middle is junior Horatio Reid and sophomore co-captain Nobel Hagbu, who joins CUNYAC All-Star sophomore Jacob Szumanski on a taught back-line.

“It always takes a while to come out of the gate and get everyone on the same page, and we struggled with that a little last year,” said Tardy.  “By the end, however, we showed that we had some more confidence and belief in what we wanted to do, and the wins started to come.”

Part of the process for Tardy involves scheduling the region’s elite teams, particularly early in the season, to prepare the team for the CUNYAC onslaught of games at the end.  “We put our kids into pressure situations early in the season where we know we will be attacked.  This is how you get better and I think the guys who were here last year will benefit a lot from that experience.  It gets us used to playing at a faster pace.”

For the Dolphins it starts this weekend.  On Saturday at Noon, the Dolphins host the United States Merchant Marine Academy, and NCAA Division III Tournament qualifier a year ago, and they will follow on Monday against Trine University as part of the 3rd Annual CSI Kick-Off Classic.  With little rest for the weary, CSI travels to face NYU, before a pair of home dates next weekend against SUNY-Purchase and Kings College (PA).  “We will know where we are from there,” said Tardy.

The healthy amount of games early in the season with the summer heat still lingering should give plenty of time for many players to shine, including a handful of new talent the coach is eager to see make a dent in 2014.  Look for Nermin Kurtesi, a John Jay College transfer, and Ilir Papraniku, a BMCC transfer to see time early, with returning players like Peter Hanna, a frosh last year who returned to soccer after a two-year hiatus figuring into the mix and blossoming into bigger roles.  The influx of newcomers in making the coach excited about what the future holds for CSI Soccer.

“It’s exciting.  We have guys who buy into the program.  I think the talent level we brought in this year exceeds last year, and everyone knows their role and what they need to do.” When asked which team in the conference was the team to beat this season, the coach responded, “We are!”  The coach acknowledged that the entire conference will be getting better, but he hopes his side is right up there with them.  “We want results this season, plain and simple,” said the coach.

For now, or course, Tardy will take things one game at a time.  With upwards of 20 contests cramped into a two-month frame, the coach knows anything can happen.  The focus for now will be simply on what should be an eventful weekend.  “Two wins would be fantastic, but seeing us grow as a team and play a full 90-minutes is what we are after.  Our goal is to see progression and see ourselves moving a step further to where we want to be at the end.”

All CSI home games are free of charge and CLUE Certified (PG) for all students.  Most of CSI’s home games and select road contests will be available live via webcast on www.csidolphins.com/watch or by simply clicking here.