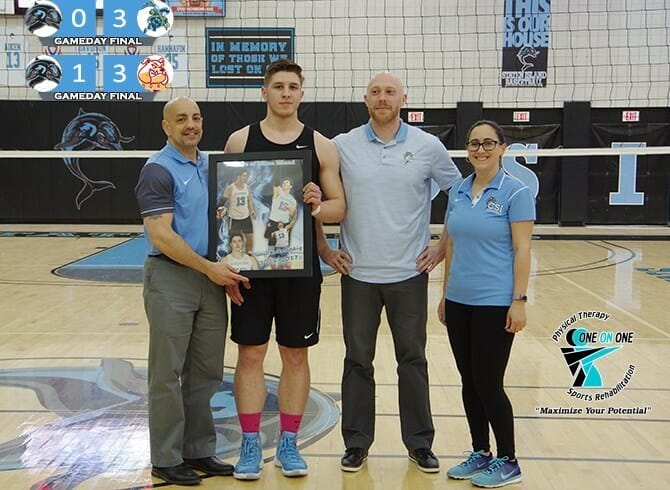 On a day when the Dolphins would honor lone senior Danil Kukovitskiy, the College of Staten Island men’s volleyball unit dropped a non-conference trimatch, falling to Wilkes University, 3-0, and Brooklyn College, 3-1.  The Dolphins dropped to 7-15 overall as they enter the CUNYAC Postseason.  Wilkes improved to 9-16 after the afternoon, while the Bulldogs finished at 13-11.

GAME ONE
Wilkes was able to slide by the Dolphins by scores of 25-22, 25-18, and 25-17.  In the opening set, the Dolphins made the most of Colonel mistakes early getting out to a 9-5 lead as Wilkes struggled at the front of the net with a pair of attack errors and a total of three service errors.  Wilkes would righten the ship, using a 9-3 run from there, sparked by two kills each by Mike Morrison and Michael Henne.  The Colonels would not trail again, building a four point lead on two occasions and after CSI cut it to 24-22, John Pietrzyk made the final kill to win the opening set.

Wilkes got the hot start in the second set, using three-straight attack errors by CSI to get off a 6-2 lead.  CSI rallied to tie it at 7-7 and the team would trade points until again, Wilkes got hot, going on an 8-1 run to take an 18-11 lead, led by three kills by Pietrzyk.  CSI went on a 6-0 run late featuring kills by Kukovitskiy and Mark Palencia, but following a timeout, a Mike Morrison kill clinched set two, 25-18.

CSI had an early advantage in the final set, but again Wilkes would outlast the younger Dolphins, as they used three-straight Pietrzyk aces to build an 11-6 lead.  CSI would cut it to 11-10 following a Kukovitskiy kill, but the Colonels stayed the course and put on heavy pressure rolling to a 6-1 run from there to assume full control, en route to the 25-17 decision.

Pietrzyk led all with 14 kills with no errors on 21 attempts while Thomas Bogarowski finished with 12.  Daniel Sales tallied 29 assists while Pietrzyk also led with 9 digs.  For CSI, they were paced by Palencia’s 11 kills on 37 attacks.  Brandon Lei tallied 16 assists, while Anthony Vigilante mustered up a game-high 10 digs.  Wilkes out-killed CSI, 49-23, and put up seven blocks in the game.

In the opening set the two teams were neck-and-neck, and tied at 7-7 before BC went on a mini 3-0 spurt to take a 10-7 lead that it would never relinquish.  A Palencia kill brought CSI to within one, but BC responded with a 4-1 edge to take another sizable lead.  A Vaughn Titus kill opened the lead to 20-14, as BC was able to coast the rest of the way towards the win.

Two Titus aces and an Ahmed Moawad kill gave BC a 6-0 edge to start the second set and from there, CSI was trying to crawl out.  They wouldn’t have much luck and BC opened up a 15-5 lead on a Moaz Choudhary ace of his own.  CSI finished the set on an 8-6 run, using two strong kills by Anthony Vigilante but by then BC was up by too many and CSI fell again 25-18.

Brooklyn looked a little too comfortable going into the third set and CSI proved it had the strength to muster up an upset.  The Dolphins took a big, 12-5, lead, using more kills by Vigilante and Steven Caruso.  CSI extended to 17-9 on a Palencia kill and then BC came storming back.  Six-straight points by the Bulldogs made it 19-17.  The teams traded points from there, until an attack error by Palencia knotted it at 22-22.  With the score, 23-23, BC went up 24-23 on an attack error, but CSI responded with three-straight points first with two Vigilante kills and then a BC error to win, 26-24.

That momentum carried over into a very competitive fourth-set, but Brooklyn made the final, most important run when they needed it most.  There were four lead changes and eight ties when the score was knotted at 14-14.  That’s when BC used an 8-2 run, powered by three Titus kills to rally forward.  That allowed BC to steady into a 25-19 win and a 3-1 win overall.

The trimatch loss puts an end to the CSI regular season.  Now they will be idle until the CUNYAC Quarterfinals.  The Dolphins will travel to Lehman College on Tuesday evening at 6pm, with the winner to play Baruch College in Semifinal play.