VICTORY ON DAY ONE FOR CSI AT NCAA CHAMPIONSHIPS 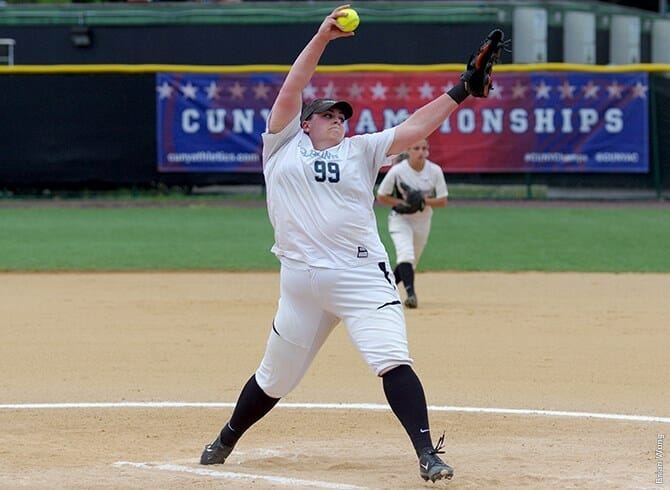 The College of Staten Island women’s softball team made a terrific entry into the 2017 NCAA Division III National Championship Tournament this afternoon, scoring a 4-2 victory over the Engineers from Rensselaer Polytechnic Institute at the Williams College Regional in Williamstown, Mass.  The Dolphins will advance to winner’s bracket play tomorrow morning as part of the double-elimination tournament, awaiting the winner of William College and Thomas College (MA) in a game that gets underway at 3:30pm.  The Dolphins extended on their program best record by moving to 35-7, while the Engineers fell to 25-13.

The Dolphins gave the ball to first-year sophomore Alison Meagher in this game, while RPI powered back with Liberty Conference Player of the Year Stephanie Caudle.  Both pitchers wiggled out of base-runner jams in the first, and in the second inning the Engineers threatened further as Meagher walked Cam Caswell with one out and then Lillian Kolehmain followed a single.  Meagher then walked Maddie Provencher to load the bags and the Dolphins were officially in trouble.  With Rebecca Keinz at the plate, Meagher then came too low with a pitch that skipped in the dirt and passed CSI catcher Vanessa Jioia, allowing all base runners to advance and give RPI a 1-0 lead.

Thankfully for CSI, Meagher was able to settle, and with runners at second and third with one out, Meagher rebounded to get Keinz to strike out and then got leadoff hitter Victoria Greco harmlessly ground out to end the frame with the score only 1-0.

CSI needed a response, and used the third inning for a fitting one that would hold for the rest of the game, helped along by costly RPI errors in the field.  Christina Ceverizzo led off by getting struck by a high inside fastball from Caudle, and after Julianna Cretella struck out, Jacqueline Cautela earned a walk.  Antoinette Galbo followed trying to sacrifice herself to move the runners, but a throwing error by Kolehmain at third base allowed Galbo to gain first anyway while Ceverizzo raced in home and Cautela in to third.  Patricia Riches followed, stroking a single into center field, just off of the glove of Caswell at shortstop.  That scored Cautela, giving CSI a 2-1 lead, as Galbo advanced to third base.

With one out Vanessa Jioia followed with a groundout to second, but Galbo raced in as the eventual game-winning run, moving Riches as well all the way to third.  That brought up Kristy Colangelo, who ended a long at-bat with a single through the left side to make it 4-1, easily chasing in Riches.  Caudle ended the inning from there, but CSI had inflicted heavy damage that they entrusted to their defense.

After a routine third, a frustrated RPI kept knocking on the door but could not pull through against the Dolphins.  In the fourth frame, Kolehmain struck the second of two singles with just one out, but Meagher again countered with a strikeout and groundout to end the threat.  In the fifth, a CSI error allowed Devan Puhl to gain first with one out, but then Chelsea Elliot grounded into a double play to end that threat prematurely.

Two more hits for RPI in the sixth were again erased, as Meagher induced two fielder’s choice groundouts off of the bats of Kolehmain and Provencher.

Play moved to the seventh, and after CSI went quietly, it was time for a last-ditch effort by RPI and they thrust a scare into the Dolphins.  Kienz started with a walk and Greco followed with another, putting the tying run at the plate with no one out.  Puhl grounded into a fielder’s choice with Kienz erased at third base.  That brought up pinch hitter Courtney McArthur.  She would bounce a hopper to second but Cautela fumbled on the play, allowing McArthur to reach while bringing in Greco from second to make it 4-2.

With their top hitter up, Meagher again induced a ground ball and this time Cautela threw out Caudle for the second out as runners moved over to second and third.  Needing a hit to tie, it was then up to Christine White who was 2-3 on the afternoon to that point.  White stroked a rope to left field but Nicole Meilak was there for CSI to make the grab and cap the win for CSI.

The win for CSI made it three years in a row that the Dolphins have taken at least one game in Regional Round play.  Now their trick will be to keep rolling.  They will take on the winner of Williams College vs. Thomas College (ME).  Their game begins at 3:30pm this afternoon.  The two losing sides will play at 11am tomorrow in the first elimination game of the tournament.

(Stats to be posted soon)