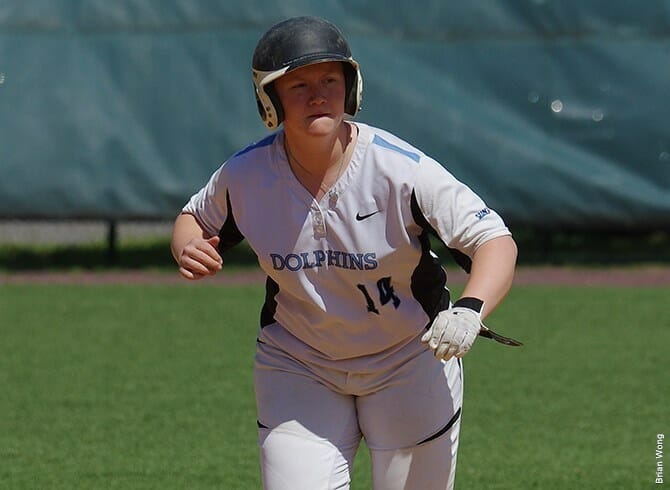 Timely hits in the fourth and sixth innings for No. 19 Williams College handed the College of Staten Island a tough, 6-1, defeat, putting the Dolphins on the brink of elimination having to win out the rest of the way beginning later this afternoon as part of the NCAA Division III National Championship Tournament’s Regional round of competition.  Williams advanced directly to the Final on Sunday, while the Dolphins will have to face the winner of Thomas College (ME) and Rensselaer Polytechnic Institute in a game scheduled at 1:00pm.

Yesterday, both teams that scored first in the tournament failed to claim victory and that’s what happened again this morning, as CSI was able to take the opening lead as the home team on the visitor’s field in Williamstown.  Against WC starter Mackenzie Murphy, the Dolphins pounced in the second inning.

Kristy Colangelo led off with a single after a lengthy at-bat, and after Murphy retired Ashley Notaro, Jamie Holmes, who missed yesterday’s game due to classroom commitments, laced an RBI double to right-center, giving the Dolphins a 1-0 advantage.  Holmes, however, was stranded at second base, ending the threat.

CSI starter Alison Meagher paced CSI out of the third, but in the fourth inning, an unfazed Ephs team went back to work and started stringing together timely hits just when they needed them.

To start the fourth, Lexi Curt laced a one-out double to get things started.  Meagher then got Murphy to strike out, but with two outs Rebecca Duncan was able to single putting runners on the corners, and then Margo Beck launched a deep fly ball that cleared the right-center field fence for a three-run homer, instantly giving the lead to Williams, 3-1.

CSI went down in order in their turn of the fourth and the fifth, and play extended into the sixth.  There, Williams struck again, and the wheels started to fall off for the Dolphins.  Meagher allowed a lead-off walk and then when Murphy tried to lay down a sacrifice the Dolphins tried getting the lead runner at second base and an Antoinette Galbo toss bled into the infield, putting runners at second and third with no one out.  Duncan then followed up with a double blast that scored both base runners to make it 5-1.  After home run hitter Beck was walked, Brenna Martinez singled in Duncan to make it 6-1.

The Dolphins went down in order again in the sixth and the seventh, as Murphy retired the final 17 CSI hitters in a row to end the game, getting the win allowing just three Dolphins hits.  Meagher took the loss tossing six innings, while Nicolette Trapani came in for a 1-2-3 seventh inning of relief.

CSI will now await the winner of Thomas or RPI for an elimination game at 1pm.  Those two teams play at 11am.