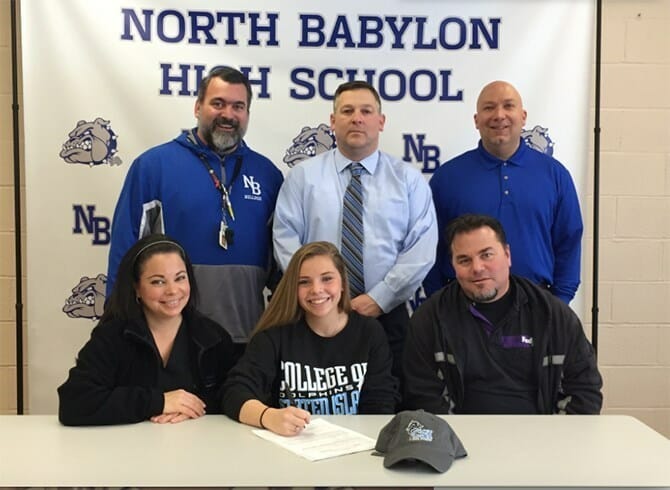 Head Coach Giuseppe Pennetti and the College of Staten Island women’s soccer program is proud to announce the celebratory signing of North Babylon High School senior Ashley Hunter.  The midfielder and forward is expected to add value to a deep Dolphins lineup, as the team will look towards a repeat of last year’s CUNYAC Championship and National Championship run.

A fixture in the NBHS lineup, Hunter spent a majority of her time on the attacking side of the ball in her two years on the Bulldogs’ varsity side posting over 20 goals and assists. Hunter also played on the Long Island / New York PDP for two years and starred on her club soccer team, the Northport Blue Momentum, a majority of her career, advancing to a state final in 2016.  Making CSI her choice was an easy one, according to the Long Island native.

“Coach Pennetti reached out to me and I followed up with a visit to CSI.  The team was very welcoming and I knew it would be a good fit,” she said.  “I hope to come in and make an impact right away and lead us to another championship.”

Hunter hopes that her attack-first mentality could bolster the Dolphins’ offensive front, improving on a side that averaged 2.89 goals per game a year ago.  “I definitely stay defensive but I’m goal-happy and will definitely look to push play and go in and attack whenever I can.”

The youngest of three siblings, Hunter will major in Nursing.   Upon graduation, she hopes to be Nurse Practitioner.  Until then, Coach Pennetti is hoping to maximize Hunter’s talent to bolster the CSI lineup.

“Ashley is a wonderful player with amazing flank attack ability,” said Coach Pennetti. “I envision Ashley to be one of the next wave of players to come to CSI that can contribute in a wing-attacking position and to defend full field.  She has the potential to become a dominant player in our style, and her ability to be a leader can help to maintain our tradition of success on and off the field.  I am very excited to welcome her aboard.”

The CSI Women’s Soccer season kicks off on September 1, when the Dolphins face off against Keystone College in La Plume, PA.  They open up at home on September 5 against New Jersey City University.