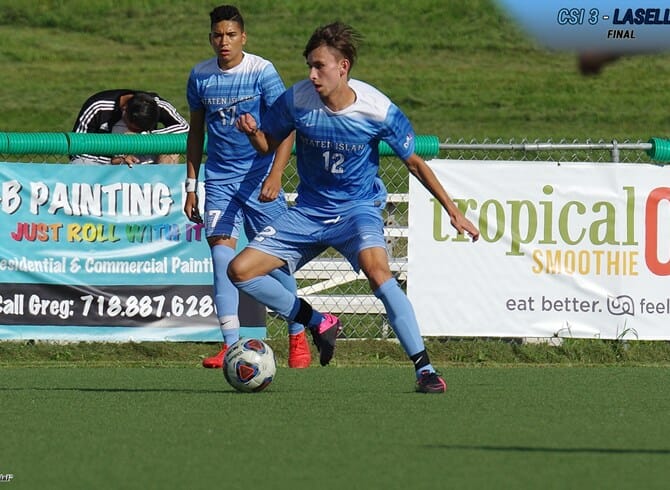 The College of Staten Island men’s soccer team ran their winning streak up to three games this afternoon, this time by way of a 3-1 road victory over Lasell College in Newton, Massachusetts.  CSI improved their record to 3-1 thanks to two late second-half goals, while the Lasers fell to a season-opening 0-3.

Despite an overwhelming advantage in shots, CSI was unable to register until late in each of the halves, leading to some obvious frustrations.  In the 9th minute, senior Adrian Cosovic fired away and got a ball passed LC keeper Jackson Burhans, only for it to hit the post and sail off wide.  After several attempts went off-target, Burhans next save came 20 minutes later on a Joe Bolella offering.  Shortly after, LC’s Kenan Omerbasic and CSI’s Dardan Nika were carded for rough play, one of five yellows handed out, four to the Lasers.

With the clock winding down in the first half, CSI finally got on the board.  With 3:54 remaining, freshman Breny Salas rocked a shot off of the crossbar, but the ball fortunately took a CSI bounce and landed right onto the waiting boot of Mike Arellanes, who scored his first career goal at 41:06 to give CSI the lead on its 15th shot of the stanza, and only their fourth on-goal.  Dolphins’ keeper Balint Barabas made a single save in the first 45.

The 1-0 lead seemed tame for the Dolphins, who at that point were dominating possession and statistics, but Lasell came roaring back in the second, and at the 54th minute, Stephen Blood fired one in on goal that Barabas parried.  After the ball exchanged hands Connor Wall was able to wrestle it away from defenders from just beyond the 18-yard box, and put a rocket passed Barabas to knot the score at 1-1.

Both teams then countered for chances, using the long ball as a main weapon and attacking from the flanks.  Shots were harder to come by for the Dolphins, and their first five of the second half all were wide or high of goal.  That was, until the 79th minute, when junior Ali Fares put a sterling ball in the box via a free kick that freshman Bryant Navarro headed in to make it 2-1, his second goal of the season, and what would be his second game-winner.  CSI clamped up defensively from there, and again on the counter, just 38 seconds later, senior Dardan Nika popped in a goal unassisted after a long throw-in and a juke inside the goal mouth to beat a defender.

With a 3-1 lead, CSI threw heavy numbers into their defense, and despite three Lasell shots, two on goal, Barabas was able to make standard saves to preserve the win and extend the Dolphins win streak.

CSI finished with a 23-11 edge in shots, but Lasell had seven on goal to CSI’s six.  CSI enjoyed five corner kicks to Lasell’s two.  Barabas recorded his first career victory with a six save win, while Burhans made three saves in defeat.  CSI’s Adrian Cosovic and LC’s Matt Lasha led all field players with four shots apiece.  This was the first-ever meeting between the two sides.

Up next for CSI will be a return home to face New Jersey City University on Wednesday, September 13, at 4pm at the CSI Soccer Complex.