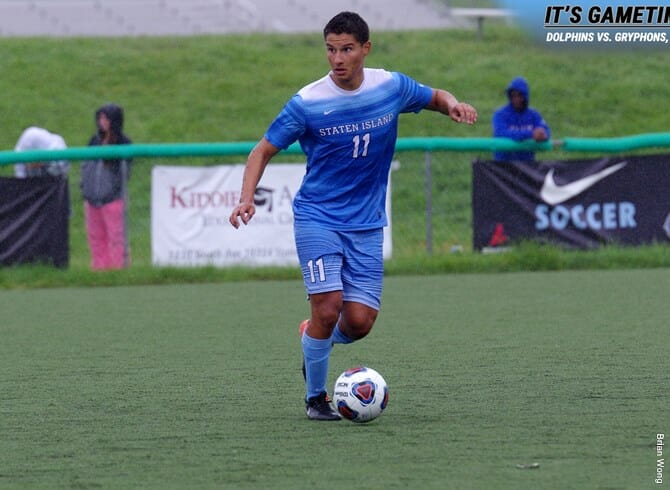 The CSI men’s soccer team gets back on the field today to take on Sarah Lawrence College in a game that was supposed to be played yesterday, but was switched to this afternoon at 4:30pm at the CSI Soccer Complex.  The Dolphins are riding high from a 7-1 win they had against St. Joseph’s (BK) this past Sunday, while SLC is looking to break into the win column for the first time this season.

CSI vs. SARAH LAWRENCE COLLEGE AT-A-GLANCE
Matchup:  CSI (1-1) vs. Sarah Lawrence College (0-1)
Where: CSI Soccer Complex, 2800 Victory Boulevard, Staten Island, NY
All-Time Series:  First Meeting
Players to Watch (CSI):  Freshman Wilson Quintero and sophomore Ryan Layman are leading the way for the Dolphins, having played in 174 of CSI’s 180 minutes so far this season, a majority of time on that back line.  Quintero has added a goal.  Five of the Dolphins’ seven goals this season have been off of the foot of first-year players, including first-year senior Logan Tassin, who spent a bulk of the first half against SJC at the top.  CSI is led in the scoring column by senior Dardan Nika, who has a goal and assist on a team-high 9 shots.  In net, games have been split thus far from Balint Barabas and Ivan Barreraserao.  Both have fared well, combining for seven saves on 18 shots faced.
Players to Watch (SLC): SLC has not scored this season, but are led in the shot column by Finn McMillan, who registered two in the season opener against Lehman College.  Scoring was at a premium last year for SLC, but they do return their top three scorers from a year ago, including Mohamed Camera, who had a team best six goals and Alix Legrand who registered five next to McMillan’s four.  Overall, the Gryphons are led by six seniors that includes keeper Mehran Hicks, who despite yielding three goals against Lehman, made a whopping 14 saves in SLC’s opener.
News and Notes:  This will be the first meeting between these two teams in program history.  Sarah Lawrence is still a developing program, and have not posted a winning season yet in their history.  They have made headway, as they posted a 4-13 season last year, with wins against CUNYAC teams York College and Medgar Evers College.  It was their largest win total since the 2011 season when they went 5-8.  The Dolphins, meanwhile, are trying to post back-to-back wins on home turf for the first time since early-October of last year.  The seven goals they scored against SJC-BK on Sunday matches their highest set last year in a 7-0 win over York.  The Dolphins also had seven different goal scorers in the game.  The last time that happened was back on October 28, 2015, an 11-0 playoff win against Medgar Evers College.  CSI is 21-8-4 at home since 2014, far better than their 12-19-1 record on the road in that same time frame.  Meanwhile, SLC has struggled on the road, going just 6-36-2 since 2012.